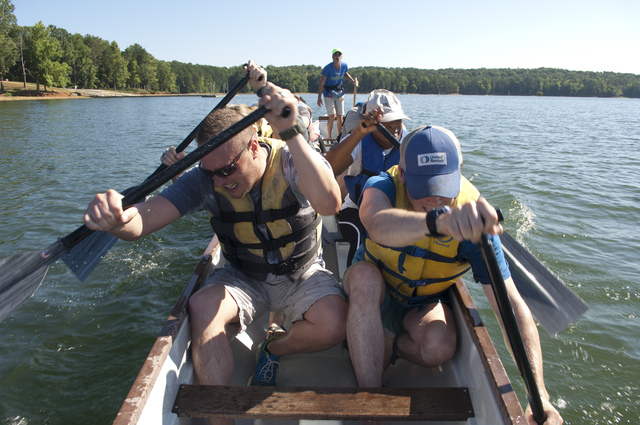 LaGRANGE — Teams for Saturday’s Dragon Boat Races are in full practice mode, with paddles hitting the water at Pyne Road Park this week.

Twenty teams of 20 people each have signed up to paddle the Dragon Boat Races, which begins 8:45 a.m. Saturday at Pyne Road Park.

The first-of-its-kind event at West Point Lake is a fundraiser for Harmony House Domestic Violence Shelter, and Penny Bahling, a boat coach and race organizer, said with a little teamwork, the competition can be stiff.

“Dragon boat racing is an adrenaline-filled ride with 20 people paddling in sync together and really making the boat really fly,” Bahling said Thursday. “We typically go between 10 and 15 miles per hour with a good team. We go down the race course fast. The race course is 250 meters long, so it takes a little over a minute — the longest minute of your life.”

Jeff Duran, a member of Troup County Sheriff James Woodruff’s “Blue Line Dragons” team, said he and his fellow paddlers plan to take Bahling’s advice, and do their best to stick together.

“It was a lot of fun, it was exhausting,” he said of a practice session Thursday. “The guys kept splashing water in the boat, so we had to learn how to just get together. Timing (is important), making sure I’m in time with the person in front of me. Teamwork is the key to doing it.”

Duran thinks is team his ready, and he hopes to win.

The races will have three heats, with each team rowing at least twice during the day, Bahling said. Once the first two races are done, the times will be averaged, and the eight teams with the highest average time will head for the third heat. In the third heat, none of the previous times matter, Bahling explained.

“All eight (teams) are in it to win it,” she said of the third round. “So, even if the eighth place team going into it has the best time of the final round, they’ll win gold. Out of the top eight, it’s anybody’s round.”

Ginger Zackry, president of Harmony House’s board and a founding member, said she hopes everyone has a good time at the races, and she’s excited to try a different type of fundraiser.

“We have historically had two fundraisers every year to promote awareness and certainly to raise money to support our shelter from within,” she said. “We are state certified and we get lots of support else where, but it’s very important that we support ourselves from within. … We just really felt after seven years, it was time to do something new.”

http://lagrangenews.com/wp-content/uploads/sites/37/2016/07/web1_DragonBoats02WEB.jpgC.J. Gibson, left, an investigator with the Troup County Sheriff’s Office, and Ryan Cadenhead, a sergeant at the Troup County Jail, row a 46-foot dragon boat on Thursday at Pyne Road Park.