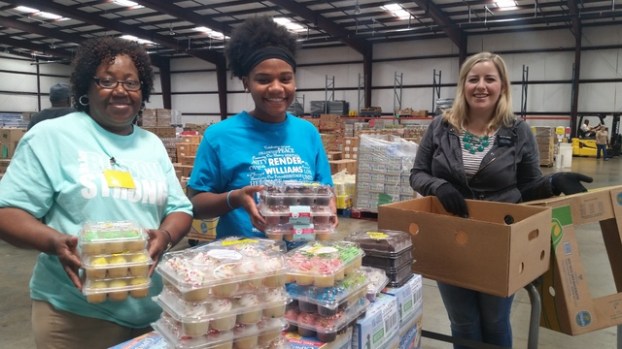 LaGRANGE — When folks in Troup and surrounding counties are strapped for cash or have no money and are in need of a nourishing meal, they are most likely fed by food that came off the shelves of Feeding the Valley food bank.

That need for nourishment grew last year from July 1, 2015, to June 30, 2016, and the organization’s food distribution increased by 9.2 percent, said Frank Sheppard, the president and CEO of Feeding the Valley. June was the group’s highest month for distributing food items throughout the 14 counties it serves.

The latest data showed there are 87,000 chronically hungry people within FTV’s coverage area, stated Sheppard. But the organization and its partnering agencies are barely reaching half of them.

“We’re only helping just over 40,000 of those people,” he said. “So we still have a long way to go in terms of solving hunger. Our long-term plan is to distribute 15 million pounds of food which would feed all those 87,000 people. That’s our goal.”

Denná Muncy, warehouse coordinator at Feeding the Valley in LaGrange, added: “It’s a difficult task to have a facility of this magnitude and know the need that has to be met … and know that there are those who are still chronically hungry. … It’s hard to know we’re just putting a dent in hunger in this county, and I have four counties to help. I know the struggle some of these folks face every day, choosing between food versus paying a mortgage or buying medicine.”

The facility in LaGrange opened in March 2014 and has continued to grow.

“Denná has done a good job forging relationships with folks up there,” Sheppard said. “We’ve provided food for Camp Viola and Camp Winshape. A lot is being done for law enforcement officers in the wake of recent events. In terms of our partner agency base, I believe we grew 15 percent, and that really helps us to be able to serve more people in the community.”

Muncy recently teamed up with the Coweta Judicial Circuit and the Troup County District Attorney’s Office, and continues to provide food for several community outreach services like the mobile food unit that travels to impoverished areas with no food banks, and the backpack program that provides nourishing meals to children over the weekend in food insecure homes, just to name a few.

“I love being a part of Feeding the Valley and being able to reach into the community and helping those family members, friends and church members who are food insecure,” said Muncy. “The agencies that are helping them are heroes. They don’t have a mask or a cape, but they make sure our sisters and brothers are fed and taken care of in the fight against hunger. They’re part of the FTV team.”

But Muncy and Sheppard admit there have been some growing pains along the way. Both Feeding the Valley facilities in Columbus and LaGrange are running out of space to keep up with increasing demand for food.

More than a year ago, the organization started a capital campaign to raise funds, in part to upgrade one or both food banks. The goal was set at $4.7 million dollars, said Sheppard. As of last month, Feeding the Valley had reached 80 percent of its goal and broken ground on a new warehouse in Columbus.

The building will be four times the size of the current facility and double the capacity of cold storage units for items such as fruits, vegetables and meats, Sheppard said. It also means the shelves and storage units a the FTV warehouse in LaGrange will be replenished with foods at a much faster pace.

Some of the money from the capital campaign is earmarked for the LaGrange facility to help purchase more racks and shelving, which will allow more storage as well, stated Sheppard.

“We are proud of our campaign and we know it will help us distribute more food and help with more people,” he said. “We feel we’re poised for additional success with this undertaking and we’re very pleased with how the northern counties (Troup, Meriwether, Harris and Talbot) have embraced us. We’ve been able to grow those operations and help those people.”

The capital campaign funds may also help the Feeding the Valley LaGrange warehouse find a permanent home, Sheppard added. Currently, the organization is leasing the property on Gordon Commercial Drive. But Sheppard said the organization has already been in talks to find a building or land where a new warehouse can be built with room to expand.

The lease on the FTV warehouse in LaGrange will expire in a year and a half, he said.

Denná Muncy, warehouse coordinator with Feeding the Valley in LaGrange, checks out food for Pam Murphy, a member of Rosemont Baptist Church who teaches a weekly Bible study in Calumet Park, where she feeds snacks to participating children. The church is one of the many local agencies Muncy has partnered with to help feed families who are food insecure in the community.

http://lagrangenews.com/wp-content/uploads/sites/37/2016/07/web1_FTV1.jpgDenná Muncy, warehouse coordinator with Feeding the Valley in LaGrange, checks out food for Pam Murphy, a member of Rosemont Baptist Church who teaches a weekly Bible study in Calumet Park, where she feeds snacks to participating children. The church is one of the many local agencies Muncy has partnered with to help feed families who are food insecure in the community.

Deborah Estes and Alexia Hurston with Confidence Missionary Baptist Church, along with a Feeding the Valley volunteer, stack items on a dolly for their church’s food pantry.

http://lagrangenews.com/wp-content/uploads/sites/37/2016/07/web1_FTV2.jpgDeborah Estes and Alexia Hurston with Confidence Missionary Baptist Church, along with a Feeding the Valley volunteer, stack items on a dolly for their church’s food pantry.

LaGRANGE — One man suffered minor injuries Wednesday afternoon after his car flipped and hit a power pole in the... read more