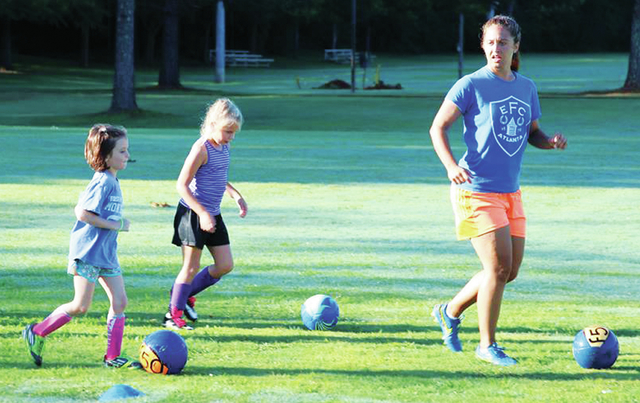 LAGRANGE – She’s ready for the challenge.

Kasey Ross, who has been one of the instructors at the LaGrange Girls Soccer Camp this week, will be the coach for a newly-formed 18-and-under team that will begin play this fall.

The team will be a part of the Troup Titans organization, and it will play its debut game in August.

Tryouts were held during the spring, and Ross got a chance to meet her new players, and she said that the girls’ teams from Callaway, LaGrange and Troup will each be represented.

“We pretty much took the top three players from all three high schools and formed a club team,” said Ross. “So we should have a pretty good team.”

A handful of those players have been serving as instructors during this week’s youth camp at the Troup County Soccer Complex.

“Some of the girls that are out here today will be on my team,” Ross said at the conclusion of Thursday’s camp session.

Last spring, Colin Ross served as a part-time coach of the LaGrange High girls’ team, and he worked with the goal keepers.

This coming spring, Ross will be a full-time member of the LaGrange coaching staff.

Colin Ross has also been helping out with this week’s soccer camp, and he has been able to work alongside some of the players he’ll be coaching next season.

A handful of LaGrange High’s players have been serving as camp instructors.

“Working with the high-schoolers has been great, and seeing how they work with the girls,” he said.

Kasey Ross and Colin Ross have both previously worked with the Southern Soccer Academy in Kennesaw, and Colin Ross spent a season as a graduate assistant on the LaGrange College women’s team.

Kasey Ross works with the campers during the LaGrange Girls Soccer Camp that is being held this week. Contributed photo

http://lagrangenews.com/wp-content/uploads/sites/37/2016/07/web1_soccer-coach.jpgKasey Ross works with the campers during the LaGrange Girls Soccer Camp that is being held this week. Contributed photo