Girls getting their kicks in 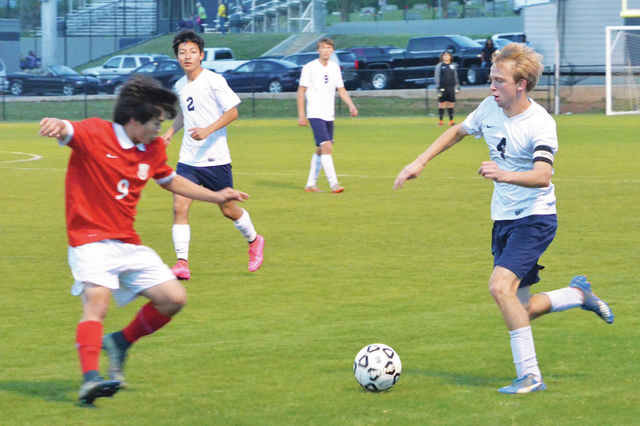 LAGRANGE – It was for girls only.

A youth soccer camp is being held at the Troup County Soccer Complex this week, and by design, all of the participants are girls.

The first ever LaGrange Girls Soccer Camp kicked off on Monday and wraps up today, and the instructors include coaches and players from the LaGrange High girls’ team.

The camp director is LaGrange High soccer coach Andy Fritchley, and he said the idea was “to do something special for girls soccer in the area.”

To assist with that mission, Fritchley enlisted the aid of a handful of his players from LaGrange High who served as instructors hroughout the week.

Among that group is Catherine Patton, who said it has been “awesome working with (the campers).”

“It helps the girls,” Patton said. “It’s fun helping train them, and make them better.”

Other players who have helped out during the week are Maddie Patton, Maggie Asbell, Sara Kate Doerr, Ellie Doerr, Katelyn Peters and Eva Hutton.

“Without their help, we couldn’t do it,” Fritchley said.

When Fritchley began developing the concept of the camp, he knew it would be important to get the high-school players involved, and he said they have gone all in to make it a special week.

“They make the camp experience,” Fritchley said of the high-school players. “We can organize it, but really the players and the coaches are delivering the experience. It’s so positive, and so encouraging. Some of these girls that have never played before. This is a really good first experience.”

Also assisting during the camp has been the husband and wife team of Colin Ross and Kasey Ross, who are both becoming entrenched in the local soccer scene.

Colin Ross will be a coach on the LaGrange High girls’ soccer team, and Kasey Ross is taking charge of an 18-and-under girls’ team that is getting started this fall and will be a part of the Troup Titans soccer club.

Kasey Ross said it has been tremendous for the campers to have the high-school players on the field with them.

“They really look up to them,” she said. “They’re really good role models for them. It’s been a blast.”

Ross said everyone, players and instructors included, have had an enjoyable week.

Colin Ross, who helped coach the LaGrange goal keepers on a part-time basis last season, said the high-school players have been right at home this week.

“All the girls, the high-school girls, they’re all in their element, they’re all having fun, and they look really relaxed,” he said. “It’s been really cool.”

Along with Colin Ross and Kasey Ross, Heather Folsom has also been an instructor each day at the camp.

It’s a big staff, and Fritchley said that was to make sure each of the campers got all of the attention they needed.

“We really wanted to maintain a strong coach to player ratio,” Fritchley said. “And so the varsity players have been fantastic. When a kid needs extra work, we pull them to the side.”

It was a warm week, which is to be expected in the middle of July, but Fritchley said the heat wasn’t an issue.

It helped that the camp was held during the morning, and he said the campers got plenty of breaks as well, and they ended each day with some sort of activity that resulted in them getting wet.

“With the heat, we’ve got the down time,” Fritchley said. “We try to keep them entertained, and occupied. When you’re playing it’s time to play. And when it’s time to rest, it’s time to rest. We have had zero heat issues. We’ve done a really good job of keeping them cool. Every camp in the area is concerned with the heat.”

By the time the camp wrapped up on Friday, the girls had been on the field for 20 total hours, or four hours each day, and Fritchley said that time flew by.

“It really does go by fast, though,” he said. “You get here in the morning and it’s dark and quiet, and the next thing you know they’re leaving.”

OF NOTE: For more photos from the camp, check out facebook.com/LDNsports

Some of the participants in the LaGrange Girls Soccer Camp chase the ball on Thursday morning at the Troup County Soccer Complex. Kevin Eckleberry | Daily News

http://lagrangenews.com/wp-content/uploads/sites/37/2016/07/web1_soccer3.jpgSome of the participants in the LaGrange Girls Soccer Camp chase the ball on Thursday morning at the Troup County Soccer Complex. Kevin Eckleberry | Daily News

Dozens of girls from the ages of 4 to 14 turned out at the Troup County Soccer Complex this week for the first LaGrange Girls Soccer Camp. Kevin Eckleberry | Daily News

http://lagrangenews.com/wp-content/uploads/sites/37/2016/07/web1_soccer12.jpgDozens of girls from the ages of 4 to 14 turned out at the Troup County Soccer Complex this week for the first LaGrange Girls Soccer Camp. Kevin Eckleberry | Daily News

Colin Ross, one of the instructors at the LaGrange Girls Soccer Camp, tries to make a save while playing goal keeper. Kevin Eckleberry | Daily News

http://lagrangenews.com/wp-content/uploads/sites/37/2016/07/web1_soccer11.jpgColin Ross, one of the instructors at the LaGrange Girls Soccer Camp, tries to make a save while playing goal keeper. Kevin Eckleberry | Daily News