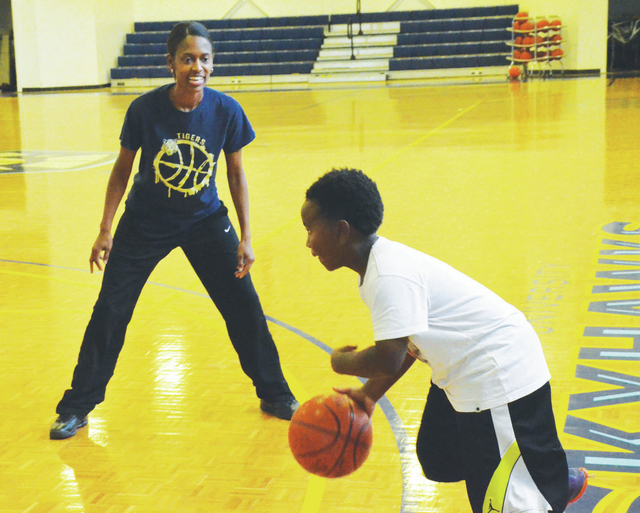 When she was growing up, Troup High girls’ basketball coach Carla Thornton spent a lot of time at the West Point Recreation Department gym, which is part of the reason why it means so much to her to return and host a camp each year.

This year’s five-day camp wrapped up on Friday, and as always, it was an enjoyable week for Thornton.

“I grew up in the West Point Recreation Department. These our my roots,” Thornton said after serving up pizza slices to each of the campers during a break on Friday. “This is where I got started from. So, I like to give back. I know I didn’t have a whole lot of anything when I was growing up. So this was my outlet. This was everything to me. I try to give that same joy and that same love and a passion for the sport to these kids.”

Thornton has been offering the camp each summer since she took over the girls’ basketball program at Troup, and she recently completed her sixth season.

The amount of campers fluctuates each summer, and the numbers were down a bit this year, but Thornton said the young people that came out last week were great to work with.

“The 10 people that I had signed up, they’ve been amazing,” Thornton said.

The coach added that she was impressed with some of the skills the boys and girls brought to the hard-wood floor of the West Point gym, and that she eyed some potential future Troup High standouts.

“It’s great to see elementary-school kids doing some things that my high-school kids can’t do,” Thornton said. “We’ve got first graders dribbling between their legs and behind their backs, finishing up the rim, hitting pull-up jump shots. It’s been a great group of kids. That’s the future right here. I can’t wait. I’ve got a point guard, a shooting guard and a small forward in there right now.”

Thornton had two of her former players helping her out during the week.

Sisters Jessica Gilbert and Jocilyn Gilbert, both multi-sport athletes at Troup, were instructors for the duration of the camp.

Jocilyn Gilbert has already graduated from Columbus State University, and Jessica Gilbert is closing in on her degree from the University of Georgia.

Thornton felt the sisters would not only be tremendous instructors, but outstanding role models as well for the campers.

“They’ve been a great help,” Thornton said. “They see girls who’ve played for me and become successful, and gone on to get college degrees. That was a blessing to have them.”

Both sisters enjoyed the experience.

“It’s been great,” Jessica Gilbert said. “We got to split them up where we each had our own small group of kids. Since it’s so small, it was almost one-on-one with them. We got to do a lot of work with them.”

Jocilyn Gilbert, who graduated in December, said she enjoyed getting to know the campers as the week went along.

“It’s really cool,” she said. “I didn’t know any of these kids. We just bonded during the week. They got to know me, and how we used to play for Carla. We just wanted to come back and help.”

The Troup High basketball camp wrapped up on Friday in West Point. There were 10 campers throughout the course of the week, and Troup head coach Carla Thornton and former Troup players Jessica Gilbert and Jocilyn Gilbert were the instructors. Kevin Eckleberry | Daily News

http://lagrangenews.com/wp-content/uploads/sites/37/2016/07/web1_basketball2.jpgThe Troup High basketball camp wrapped up on Friday in West Point. There were 10 campers throughout the course of the week, and Troup head coach Carla Thornton and former Troup players Jessica Gilbert and Jocilyn Gilbert were the instructors. Kevin Eckleberry | Daily News

Troup head coach Carla Thornton plays some loose defense on one of the campers. Thornton has been offering the summer camp since she became the Troup head coach. Kevin Eckleberry | Daily News

http://lagrangenews.com/wp-content/uploads/sites/37/2016/07/web1_basketball7.jpgTroup head coach Carla Thornton plays some loose defense on one of the campers. Thornton has been offering the summer camp since she became the Troup head coach. Kevin Eckleberry | Daily News