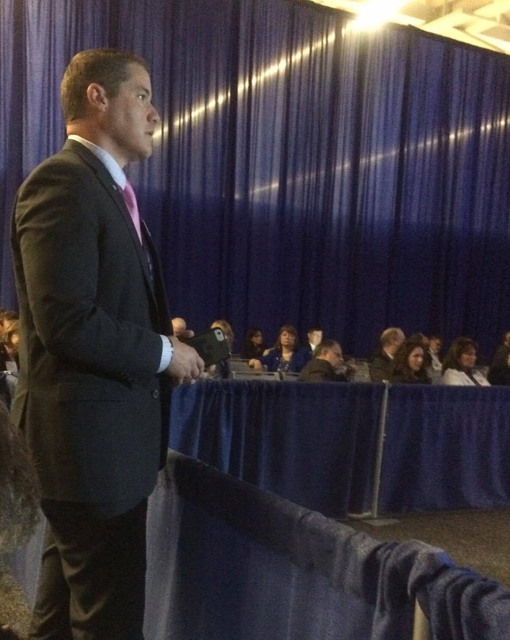 LaGRANGE — A local father is now taking his fight about the positive impacts of medicinal marijuana on the road to Cleveland, Ohio, and into the heart of Republican political power.

Dale Jackson, a Republican delegate, will be at the Republican National Convention this week with a proposal in hand containing language he wants admitted into the Republican platform. It calls for the political party to endorse the use of medical cannabis oil and show united support for families and children who are legally using the drug to control seizure disorders, end-stage cancer and other diseases.

Jackson traveled to Cleveland on July 11 to submit the proposal to the Republican platform sub-committee on health care reform. That group’s responsibility is to insert language into the national platform regarding health care.

The first attempt to push the language through did not go well, especially when the committee started to debate his proposal, Jackson said.

“Frankly, I could say I was amazed at it, but the full ignorance that was on display in the whole committee was astonishing, he said. “One of the committee members said that all of the mass murders in Colorado (like Columbine and the Aurora movie theater shootings) were from young boys who came from divorced families and that they all smoked pot. Because of that, she didn’t want anything to do with cannabis oil … when in fact, some of those boys were treated with prescription anti-psychotic medications.”

Jackson was only able to stand by and watch the debate — and the eventual vote by committee members to not add the language for medicinal cannabis oil into the platform.

“What a shame that the Republican Party missed out on an opportunity to show the nation they are a party of solutions and not just a part who says ‘no,’” Jackson said. “I felt like this was an opportunity to speak to individuals about limited government, health care freedom and parental rights. They (Republican party) responded with a resounding ‘no.’”

The Troup County father’s son Colin, 8, has autism. The family was taking advantage of a language loop hole in an old Georgia ordinance to let Colin try cannabis oil. Autism is not the list of disorders covered under the state’s law legalizing medicinal marijuana in 2015, called Haleigh’s Hope Act or HB1.

Jackson is hoping more awareness on the use of cannabis oil to treat multiple diseases and disorders on a national level will help change or amend laws in states around the country. He is now working with Sen. Tom Davis, a Republican from South Carolina who helped pass that state’s bill legalizing medicinal marijuana. Davis wants to take Jackson’s proposal to the floor at the GOP convention.

“We’re circulating the language around that we want to take to the platform and getting others to endorse it,” Jackson explained. “Dr. Ben Carson and Dr. Rand Paul, the only doctors that ran during this election, have even expressed their support of cannabis oil. So we’re trying to get them to sign on in support of the language, plus other influential politicians.

“I know its hard to get anything passed at conventions, but at minimum I am excited and encouraged with this amount of exposure,” he added. “I will continue to raise awareness and further the discussion on the issue … This is the only focus for me. … This is only about advancing the cause of medical cannabis oil medicine.”

The LaGrange Daily News will have continuing coverage of the event in upcoming editions of the newspaper.

Dale Jackson hangs his head in disappointment as the GOP platform committee on health care votes not to add his proposal in Cleveland, Ohio, on July 11.

http://lagrangenews.com/wp-content/uploads/sites/37/2016/07/web1_PreGOP2.jpgDale Jackson hangs his head in disappointment as the GOP platform committee on health care votes not to add his proposal in Cleveland, Ohio, on July 11.

Dale Jackson watches intently from the gallery in Cleveland, Ohio, on July 11 as the Republican platform sub-committee on health care reform debates his proposed language that would essentially show the Republican Party supports states that have passed laws legalizing medicinal marijuana.

http://lagrangenews.com/wp-content/uploads/sites/37/2016/07/web1_PreGOP1.jpgDale Jackson watches intently from the gallery in Cleveland, Ohio, on July 11 as the Republican platform sub-committee on health care reform debates his proposed language that would essentially show the Republican Party supports states that have passed laws legalizing medicinal marijuana.