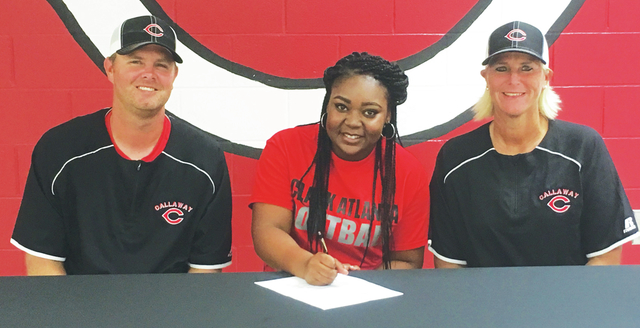 HOGANSVILLE – For four seasons, Keshonna Terrell was a fixture in the Callaway High lineup, putting up gaudy statistics while also anchoring the defense from her shortstop position.

With the success she enjoyed as a softball player, and as a student, she was going to have an opportunity to play the sport in college, it was just a matter of where.

On Monday during a signing ceremony at Callaway High that included family members, friends, teammates and coaches, Terrell announced her decision.

“I know people there, and it’s not too far away from home,” Terrell said. “It’s great. I love the campus. I like the coaching staff. It’s a good school.”

Terrell had already watched three of her former teammates on the Callaway softball team announce their college decisions.

Terrell knew she was going to have her own signing ceremony eventually, and more than a month after she graduated from high school, it finally happened.

“It was kind of a long process,” she said. “But everything worked out.”

Terrell was grateful to be able to share the moment on Monday with her family, including her parents, Lakesia Terrell and Chon Terrell.

Terrell said her father, Chon, has been her “rock when it comes to softball.”

“The days I don’t what to go to the field, he’s always pushing me,” she said. “Some days you need that. He’s just awesome. Without him, I don’t know where I’d be. He’s always been there.”

Clark Atlanta is getting an accomplished player.

Terrell stepped right into the Callaway lineup as a freshman, and for four seasons she was one of the team’s best players.

“She’s definitely going to help them out,” Callaway coach Ashley Summerlin said. “She’s just as consistent as can be. She can definitely hit. There’s no doubt about it.”

Summerlin said the only question is where Terrell will end up playing in the field.

When Terrell arrived at Callaway as a freshman in 2012, she was in the lineup from Day 1, and the transition to the high-school game was a smooth one.

She followed that up by hitting .386 with three home runs and 16 RBIs during her junior season, and Terrell hit .362 with a career-high six home runs and 23 RBIs last fall.

Terrell, who helped Callaway reached the state playoffs for four straight seasons, said her time as a Lady Cavalier will always be special.

“Everybody says that your high-school years go by quickly, and it really does,” she said. “Where does the time go? It was an awesome four years.”

She’s ready to move on, though.

OF NOTE: For more photos from Monday’s signing ceremony, check out facebook.com/LDNsports

Callaway High graduate Keshonna Terrell was joined by members of her family during her signing-day celebration on Monday. Terrell, who was a four-year starter for the Lady Cavaliers, is heading to Clark Atlanta University. Kevin Eckleberry | Daily News

http://lagrangenews.com/wp-content/uploads/sites/37/2016/07/web1_Terrell1.jpgCallaway High graduate Keshonna Terrell was joined by members of her family during her signing-day celebration on Monday. Terrell, who was a four-year starter for the Lady Cavaliers, is heading to Clark Atlanta University. Kevin Eckleberry | Daily News