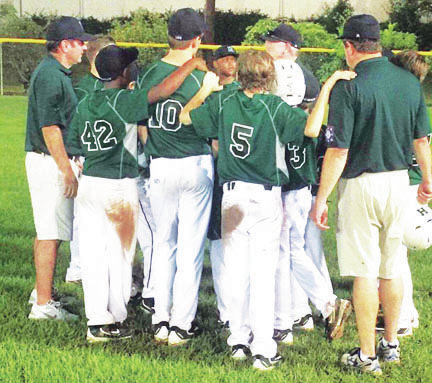 MACON – Perhaps it was meant to be.

That’s nothing new for Lee, who is a tremendous hitter and has sent more than a few balls over the outfield fence.

But this one was different.

In Friday’s game, the Hogansville players and fans, and even some of the other teams, wore black ribbons in honor of Nathan Lee.

Nate Lee, showing remarkable poise, launched a ball out of the park to help lead his team to a victory in a game that was shortened to four innings because of the run rule.

Lee and all of his teammates returned to Macon on Saturday and continued to excel, getting two blowout wins as Hogansville finished atop its four-team pool.

The top two finishers from each pool qualified for the semifinals that will be held on Friday and Saturday in Macon, and the team that claims the state title will qualify for the Dixie Youth Baseball World Series.

Hogansville, which won the District 1 tournament to qualify for state, was in a pool along with West Macon, Seminole County and Norcross, and it was no contest.

Hogansville outscored its three opponents by a combined score of 33-3, and each of the games ended early because of the run rule.

Fittingly, one of the stars of the weekend was Lee, who contributed to each one of the victories.

“Nate is a great baseball player but an even better kid,” Hogansville coach Scott Thompson said. “We all love Nate his mom Paula very much.”

Hogansville was supposed to play twice on Friday, but the second game was rained out.

Hogansville played twice on Saturday, and it beat Norcross 10-0 and Seminole County 11-1 to easily win the four-team poll.

West Macon finished second in the pool and also qualified for the final four.

Hogansville, after going 3-1 in the district tournament, was matched up against the home team, West Macon, in Friday’s state opener.

In a game that ended after four innings, Chase Williams was the starting pitcher for Hogansville, and he got the complete-game victory.

Offensively, in addition to Lee’s home run, Hogansville got a big day from Zack Thompson, who had two doubles and three RBIs.

Hogansville followed that up with a 10-0 blanking of Norcross.

Hartley was Hogansville’s starting pitcher, and he struck out six in his two innings of work to get the win.

Ben Alford entered the game in the third inning and retired all five batters he faced, and Haynes notched the final out.

Mosley got Hogansville off to a quick start with a two-run double, and Haynes, Jacob Karvelas and Hartley followed with RBI hits during a six-run first inning.

Martin led off with a double and scored on Lee’s single, and Alford added an RBI in the inning.

In the fourth inning, Hartley walked and scored on a passed ball to cap the scoring.

With one tournament game remaining, Hogansville wasn’t about to let its foot off the accelerator.

Mosley had a home run to lead another strong offensive effort, and Zack Thompson pitched a four-inning complete game in the 11-1 victory over Seminole County.

Thompson also got it done at the plate, going 2-for-3 with three RBIs, and Williams and Hartley had two RBIs apiece.

Mosley drove in a run with his solo home run, and Trey Dukes and Martin also had RBIs.

Landon Tucker had a single with a run scored, and Alford added a double.

The Hogansville all-stars huddle at the close of Friday’s state-tournament game. Nate Lee, one of the team’s players, hit a home run on the same day that his father unexpectedly died. Contributed photo

http://lagrangenews.com/wp-content/uploads/sites/37/2016/07/web1_hogansville2-1.jpgThe Hogansville all-stars huddle at the close of Friday’s state-tournament game. Nate Lee, one of the team’s players, hit a home run on the same day that his father unexpectedly died. Contributed photo