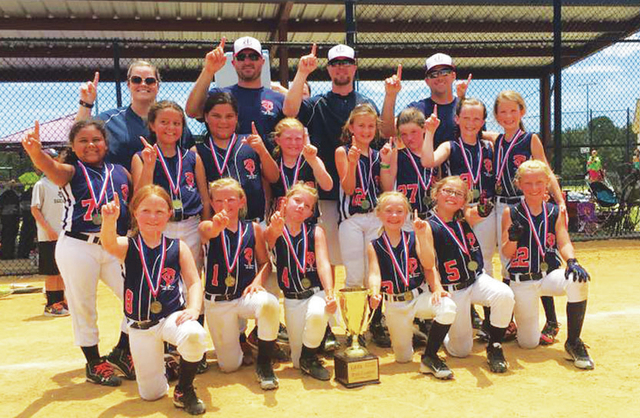 They had one goal in mind.

When the Troup County 8-and-under all-stars held their first softball practice more than a month ago, their primary objective was to win a state championship.

On Saturday in Effingham County, Troup County made that a reality.

The game was tied 17-17 in the bottom of the sixth inning when Carolyne Garcia brought Lanier Glisson in with the winning run, and the celebration was on.

“It was a surreal moment, to realize that we had accomplished our goal,” head coach Jason Graham said. “It’s overwhelming really, to see the kids celebrate, and have all the parents come out onto the field, and grab their kids and pick them up. Kids were crying, parents were crying.”

Graham said he was pleased for the players to see what hard work can accomplish.

The path to a state championship actually began a year ago when Troup County’s 8-and-under team made a quick exit in the state tournament.

The majority of the players on that team were going to be eligible to play in the same age group this year, so Graham and fellow coaches Jacob Rice and Tim Siggers decided to form a travel team.

“What we knew our girls lacked was experience,” Graham said. “What we lacked was playing together. We knew more than anything, that’s what our girls needed.”

The newly-formed travel team played in five tournaments, and while it didn’t win any of them, the players saw what it takes to succeed on that level.

When the Troup County Parks and Recreation Commission regular season was completed, an all-star team was selected, and it was made up largely of members of the travel team.

“It was a year in the making,” Graham said. “We left the tournament last year with a very sour taste in our mouths. We walked away from that with a belief that our girls were very capable of competing, but knowing that we had work to do. Then we went to work. We came up with a plan, and really worked well together.”

Graham said everyone, from the players, to the coaches, and to the parents, put in maximum effort.

“We asked a lot of the girls, and their parents, and it required a lot of sacrifice, time and work,” he said. “Everybody was willing to do whatever it took.”

Graham said everybody on the roster contributed to the team’s success, and that included Garcia, who was the catcher for all four games while also providing some key hits.

“She caught four games in a row in that blistering heat,” Graham said. “And she was really the anchor of our offense. She was the one that, every time she stepped to the plate, she was a threat to clear the bases.”

Graham said Glisson, the first baseman, had an exceptional defensive series with 30 putouts, and she also made six unassisted plays.

“In order to play and win, you have to throw it and catch it,” Graham said. “You know she’s going to catch it and get the out.”

Zoe Graham at shortstop and Savannah Rice at third base were also rock steady in the field, and Jason Graham said the entire defensive effort was superb.

The team also got it done at the plate, as evidenced by the 64 runs it scored in four games.

“We hit the ball better than anybody down there, and we made plays on defense,” Graham said. “Really, it was a combination. We did what we had to do on both sides to win every game, whether it was making a big play in a big moment, or getting a big hit to get it done.”

Graham said the other three coaches, Rice, Siggers and Becca White, were instrumental in the team’s success.

While Graham, Rice and Siggers coached the travel team together, White came on to help with the all-star team.

Rice is an assistant softball coach at Callaway High, and Graham said his contributions were critical.

“His direct involvement in girls’ softball was a huge factor in our success,” Graham said. “Every situation, I would ask his thoughts, what he thought we should do. He kind of has that calm presence. He had the experience to kind of help guide us, and that was really huge.”

Graham said that Siggers, the first-base coach, “has an extremely competitive spirit, and just a passion to compete. He has a very strong desire to win.”

Graham added that White was an ideal person to round out the coaching staff.

“We could not have made a better decision than to ask her join our coaching staff,” Graham said. “She jumped right in and was willing to do anyting we asked of her at practice. She really loved the girls, and connected with the girls, and helped us manage the dugout. She picked them up when they needed to be picked up.”

In its tournament opener on Thursday, Troup had no trouble with Dalton.

In a game that last just two innings because of the run rule, Troup won 24-0.

Troup played two games on Friday, and it won them both.

Dublin was rallying in the bottom of the sixth and it had the tying runs on base with two outs when a batter was called out when the ball hit a base runner, and that ended the game.

“We scraped and clawed and did what we had to do,” Graham said. “That game was huge for us.”

In Friday’s second game against Effingham County, Troup was down 3-1 through two innings, but it ended up winning 10-4 to advance to Saturday’s championship game.

On Saturday morning, Crisp County beat Effingham County in a 21-20 thriller to earn the right to face Troup in the title round.

It looked like Troup County was going to ease to victory when it took a 17-6 lead through four innings, but Crisp County exploded for eight runs in the top of the fifth inning to get within three.

Troup County didn’t score in the top of the sixth, so Crisp County came up for its final at-bat needing at least three runs to keep the game alive.

With one run already in for Crisp County, Troup made a big defensive play when infielder Shelby Siggers caught a relay throw from the outfield and rifled the ball home, and Garcia tagged the base runner out, keeping it a two-run game.

Crisp County did score two more runs, though, to pull even at 17-17.

Even though Crisp County had scored 11 straight runs, Graham like the position his team was in heading to the bottom of the sixth since the second, third and fourth hitters in the lineup were due up.

“We were still in the driver’s seat,” Graham said. “We knew we had our best chance to win it.”

Glisson led off with a double, and Crisp County intentionally walked Kimberly Reynolds, putting runners on first and second for Garcia.

Garcia came through with a base hit to left field, and Glisson slid in safely at home with the run that clinched the championship.

“No matter what they do the rest of their lives, they’ll remember that experience and the fact that they won a state championship,” Graham said.

The Troup County 8-and-under all-star team won the Georgia Recreation and Parks Association state championship. The team went 4-0 in the state tournament, and it beat Crisp County 18-17 in the championship game on Saturday. Contributed photo