Troup the odd-man out at state tourney 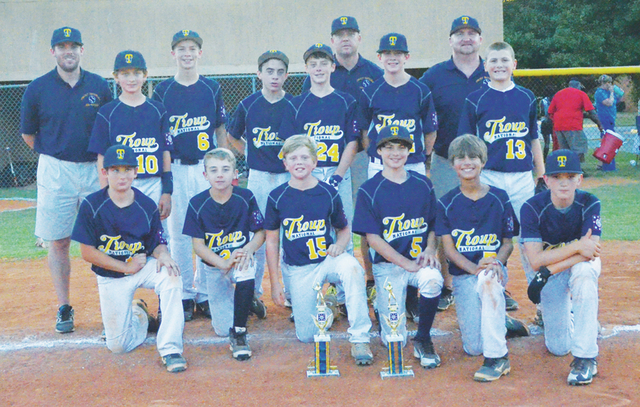 MACON – After opening its stay in the Dixie Youth Baseball 11-12-year-old state tournament with a loss Friday night, Troup National knew it had to bounce and win its next two games to have a chance to advance to the semifinals.

That’s just what Troup did, winning one game on Saturday and another on Sunday to post a 2-1 record.

Three of the four teams in the pool finished with a 2-1 record, but only two of the teams were going to move on to the final four.

The first tie-breaker was head-to-head record, and that didn’t apply since the three teams all took turns beating each other.

Wrens allowed the fewest runs of any of the three teams, and Troup and Albany were tied in that category.

It then reverted back to head-to-head for Troup and Albany, and since Albany won Friday’s game, it secured the pool’s second and final spot in the semifinals.

So while Wrens and Albany will move on the semifinals along with Hogansville and West Macon, the summer season has come to a close for Troup National.

“I hate if for them,” Troup coach Ben Jackson said. “It was heart-breaking to miss out like that. We just had one bad game.”

In its only tournament loss, Troup National fell behind big against Albany, and it fought back to make a game of it before losing 12-11.

It was a tough loss, but Jackson had no doubt his players would respond.

“I think we were behind in every game we played (in the district and state tournaments), even the ones we won,” Jackson said. “This team never quit.”

Troup National proved that on Saturday when it returned to the field for a must-win game against Wrens.

Wrens scored four runs in the top of the fourth inning to build a 6-3 lead, and Troup’s back was planted firmly against the wall.

Troup responded by scoring six runs over the next three innings to win 7-6 and keep its tournament hopes alive.

The game was tied 6-6 in the bottom of the sixth when Colton Esposito came through with a base hit to bring in the winning run.

Trevor Booton had a hit and two runs scored, Ben Ogle had one hit, and Jesse Swann scored two runs.

Firth pitched 2 1/3 scoreless innings in relief to get the win, and Justin Truett and Devon Murphy combined to pitch 3 2/3 innings.

On Sunday, Troup was in a familiar situation, knowing it had to win to have any hope of advancing.

Norcross had a 2-0 lead, but Troup pushed three runs across in the bottom of the third inning to surge ahead, and it went on to claim a 6-3 victory.

Troup pounded out 10 hits, and Swann and Firth both hit home runs.

Firth was 3-for-3 with a solo home run, and he also scored two runs, and Swann was 2-for-3 with two RBIs.

Neighbors added two hits including a triple, Wolfe had a double and an RBI, and Booton and Murphy both had hits.

The Troup National all-stars went 4-3 in tournament play this summer, and they were 2-1 in the Dixie Youth Baseball state tournament. Kevin Eckleberry | Daily News