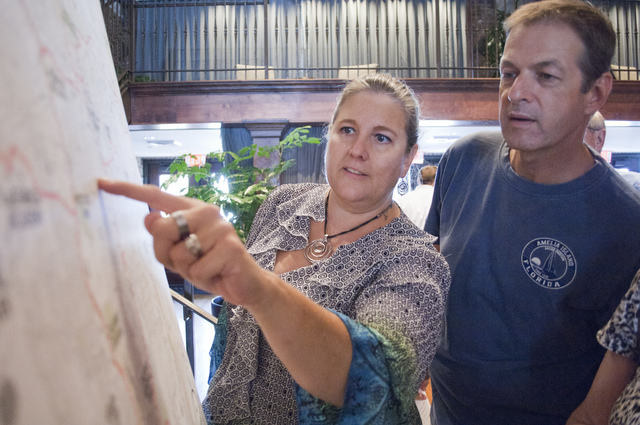 LaGRANGE — The only thing stronger than the crowd at Tuesday’s public meeting on a proposed multi-use trail was support for the project.

More than 300 people packed the Del’Avant event space downtown to hear about the proposed 27 mile path and view maps and renderings of the concept.

The trail would be called “The Thread,” and Bob Goehring, a member of the group Friends of The Thread Trail, said the name was “a beautiful metaphor for how (the trail) weaves through the community. We know it will bring us all together, and strengthen the fabric of our community.”

Goehring was an early supporter of the project, and brought the idea to Mayor Jim Thornton and Patrick Crews, county commission chairman, about a year ago after visiting France and seeing a similar trail. He helped form what would become a 21-person steering committee and worked with the Atlanta-based PATH Foundation, which specializes in trail planning, to develop the proposal.

A year later, the project is on its way to being a reality.

“The Thread trail is just another on a long list of exciting things happening in LaGrange right now,” Thornton told the crowd. “Now it’s time to see if it has legs.”

The meeting was meant to introduce the project to the community, see how people react and give them an opportunity to ask questions and give input. It’s far from a done deal, and funding hasn’t been secured, but Goehring and supporters are hoping to rally the community.

Brack Hassell, a running enthusiast, said it’s about time LaGrange invest in a project like The Thread.

He wasn’t alone. Many attendees expressed their support during the meeting’s question-and-answer session. LaGrange College President Dan McAlexander said although he couldn’t speak for the college’s trustees, he supported the project and would champion it. A physical therapist from WellStar West Georgia Medical Center said she thought the trail could lead to a healthier community. Several real-estate agents said it would increase property values and attract new businesses. A recently graduated LaGrange High School cross country runner said he’d like to see a safer place to jog.

But building The Thread is going to be a marathon, not a sprint. For starters, a similar path in Carrollton, The Greenbelt, cost about $800,000 per mile, according to Erica Studdard, executive director of Friends of The Greenbelt. There has to be fundraising, a design phase and right-of-way acquisition, but Ed McBrayer, head of the PATH Foundation, said that’s just how it goes.

“You have to have a dream out there first,” McBrayer told the crowd. “If you always had the money first, nothing would ever get done.”

The first leg of the trail is already in the works and Leigh Threadgill, city planner, is hoping it will act as a model mile to show people what the rest of the trail would look and feel like. The 1.7 mile stretch will run from Haralson Street behind Saint Mark’s Episcopal Church to Granger Park, then loop around lower Granger and come back. A $100,000 trail grant will partially fund the model mile’s construction. Surveying is already underway and it could be open by summer 2017.

Threadgill hopes the model mile will kick the trail’s momentum into high gear.

“Once we start building, we want to keep going,” she said.

It’s likely that the trail would be paid for using a mix of public and private funds, organizers said. That could come in the form of corporate-sponsored sections, SPLOST — special-purpose, local option sales taxes — or private donations, but that’s all still far from worked out, Goehring said.

Through all the excitement that filled Del’Avant, there were a few concerns. One attendee asked about the safety of the trail, and worried it could be an avenue for crime.

LaGrange Public Safety Chief Lou Dekmar was quick to counter the idea, and said that having people out walking on trails can actually reduce crime, because would-be criminals are less likely to target populated areas. Studdard, of Carrollton’s Friends of The Greenbelt, agreed. She said in the years that The Greenbelt has been around, crime hasn’t been a problem, and property values around the trail have increased.

There’s a long way to go, though, before people start strapping on their bicycle helmets. One regional planner at the meeting called the project “crazy ambitious,” but applauded the effort. When a meeting attendee asked Goehring, “If you were given the go-ahead tomorrow, how long would it be before it opened.”

Goehring’s answer: “TBD” — to be determined.

Kendall Butler of LaGrange takes a picture of the map of the proposed The Thread trail multi-use path during a public meeting Tuesday at the Del’Avant event space.

http://lagrangenews.com/wp-content/uploads/sites/37/2016/07/web1_ThreadMeeting03CMYK-2.jpgKendall Butler of LaGrange takes a picture of the map of the proposed The Thread trail multi-use path during a public meeting Tuesday at the Del’Avant event space.

A crowd fills the Del’Avant event space Tuesday for a public meeting on The Thread trail, a 27 mile, multi-use path proposed to link LaGrange’s four quadrants.

Kendall Butler of LaGrange takes a picture of the map of the proposed The Thread trail multi-use path during a public meeting Tuesday at the Del’Avant event space.

http://lagrangenews.com/wp-content/uploads/sites/37/2016/07/web1_ThreadMeeting03WEB-2.jpgKendall Butler of LaGrange takes a picture of the map of the proposed The Thread trail multi-use path during a public meeting Tuesday at the Del’Avant event space.

Louise Coniglio, left, and Kevin Barbee look at a map of the proposed The Thread trail multi-use path Tuesday during a public meeting at the Del’Avant event space on Main Street. The 27 mile path would be a paved trail linking all four quadrants of LaGrange.

http://lagrangenews.com/wp-content/uploads/sites/37/2016/07/web1_ThreadMeeting01WEB-2.jpgLouise Coniglio, left, and Kevin Barbee look at a map of the proposed The Thread trail multi-use path Tuesday during a public meeting at the Del’Avant event space on Main Street. The 27 mile path would be a paved trail linking all four quadrants of LaGrange.