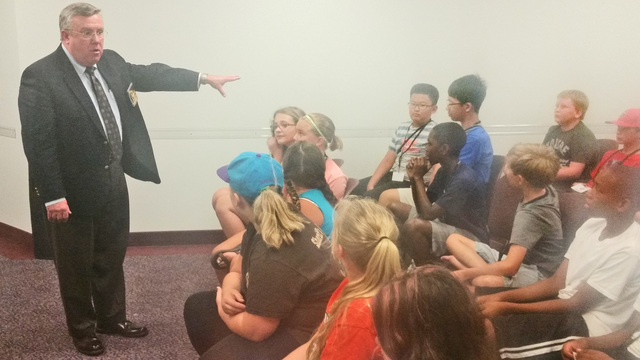 LaGRANGE — More than 20 new “deputies in training” are learning the ropes this week at the Troup County Sheriff’s Office on Sam Walker Drive.

The fresh-face trainees are actually children from around the community who are participating in the annual Sheriff’s Academy for Youth camp. This week, Sheriff James Woodruff and staff hosted students ages 11 to 12 years old; last week 9 and 10 year olds attended the camp.

This is the fourth year the event has been held under Woodruff. The department also hosted the camp under previous sheriffs.

Ten-year-old Haven Montney enjoyed the Sheriff’s Academy for Youth so much last year, she returned this summer.

“I love it,” she said. “I like how the K9 came in and how they’re teaching us stuff. … We learned that drugs are very bad for you and I don’t want to be addicted to it,” said Haven.

“The K9s were my favorite,” said camper Lexi Lester, 11. “The handler had to speak German to talk to his dog. … I also liked it when they brought in all the stuff (weapons) the inmates make inside the jail.”

While the camp is meant to be a fun event for children, organizers also use it as a tool to teach students more about law enforcement officers and how they help the community.

“I believe in the camp and reaching out to our youth to try to convince them that we are their friends and they can come to us with any problem,” Woodruff said. “When I ran for the office of sheriff, I pledged to continue to reach out to our youth. I feel like we have done that through this camp, our Sheriff for a Day program, our Junior Deputy program and our Explorer Program.”

Added Sgt. Stewart Smith, sheriff’s public information officer: “It is an excellent way for us to build relationships with the community and to hopefully be a role model for the kids.”

The deputies and Woodruff said they look forward to the two weeks of summer camp with the kids every year.

Woodruff said what he likes most about the event is “to see them explain what they have learned all week and hear about all the fun they have had,” he said. “They already want to know if they can come back next year.”

Smith said his favorite part was “being able to spend time with kids and (let) them see us as normal people … not just officers or deputies.”

The Sheriff’s Academy for Youth wraps up Friday with an award ceremony.

Sheriff James Woodruff quizzes campers on the information they learned during Tuesday’s morning session at the annual Sheriff’s Academy for Youth hosted by the Troup County Sheriff’s Office.

http://lagrangenews.com/wp-content/uploads/sites/37/2016/07/web1_web0720TCSOCamp-1.jpgSheriff James Woodruff quizzes campers on the information they learned during Tuesday’s morning session at the annual Sheriff’s Academy for Youth hosted by the Troup County Sheriff’s Office.