It was a record-setting day for Martin 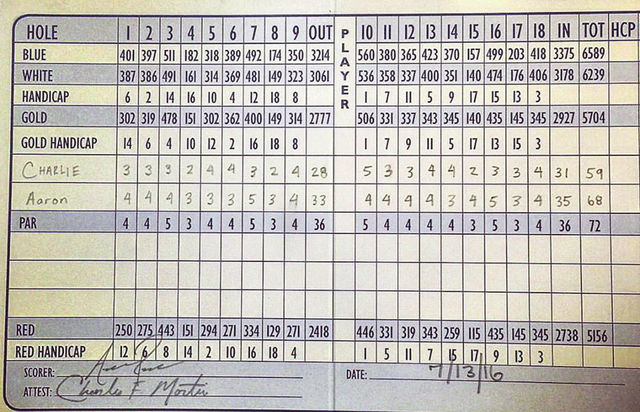 LAGRANGE – As he stood on the fifth tee box, with three birdies and an eagle already in hand, Charlie Martin made a pronouncement to his playing partners.

Martin not only set the course record at Highland Country Club, but he did by shooting a 59.

Martin shot a blistering 28 on the front nine, and he followed that up with a 31 on the back nine during the round played on July 13.

“I didn’t miss a single green all day,” Martin said. “It was the best ball-striking day I’ve ever had. It wasn’t a fluke, making a lot of putts. I really didn’t make a putt over 15 feet.”

How good was Martin?

He figures he left a number of shots out on the course, so he could have trimmed another few shots off of that 59.

“I started out birdie, birdie, eagle, birdie. And I missed a four-footer on five for birdie,” Martin said. “I left it hanging on the back of the lip on nine, and I three-putted 10 for par. It could have been like a 56.”

Martin wasn’t complaining, though, not after firing a score that few golfers will ever achieve.

Martin’s playing partner for the 18 holes was Aaron Power, and Billy Watts played with them on the front nine.

“Billy and Aaron, they were both supporting me on the front,” Martin said. “Billy is always supportive, always positive.”

Martin added that Power “was making sure I had the right club and everything.”

Martin birdied the first two holes, and he eagled the par 5 third hole before notching another birdie on hole number four, so he was at 5-under through four holes.

After back-to-back pars, Martin had another eagle on the par-5 seventh hole, and he birdied the par 3 eighth hole before closing the front nine with a par.

Martin birdied three of the first six holes on the back nine before he notched his third eagle of the day on the par 5 16th hole.

At that point, all Martin needed to do was play even-par golf on the final two holes to break 60, and that’s what he did with back-to-back pars.

When he was done, Martin and Power both signed the scorecard, and he took it the clubhouse, where it now resides.

“Everybody was kind of shocked,” Martin said. “Not many people have even come close to shooting 59.”

While there was nothing on the line, Martin said he did not approach as a casual round of golf.

“Every day I come out here, I’m trying to shoot the course record,” he said. “That’s the goal every day.”

Martin said it helped that the course is in tremendous condition right now, from the fairways to the greens.

He gave a lot of credit for that to Brint Gaches, the course superintendent at the country club.

“He’s been working his butt off getting this place in the shape it’s in now,” Martin said. “The greens are really filling in nicely. That was the first day that I can honestly say that the greens were rolling like they should. They were rolling true, and I think that helped a lot. I’ve got to give a lot of credit to Brint.”

Martin, who is in the early stages of what he hopes will be a long and productive career as a professional golfer, doesn’t play much at Highland Country Club any longer.

When he’s not on the road for tournaments, he lives in Auburn, and that’s where he plays.

He was glad to be able to show the home folks that the work he’s been putting in is paying off.

“I’ve trying to prove to people that I’ve been working on my game hard, and that I’ve put the time and effort in,” he said. “A lot of people don’t see that, because I don’t do all my practicing up here. So it’s nice to put a good round out there, and show them that just because I’m not performing like I want to in these (pro) golf tournaments doesn’t mean I’m not playing well.”

The scorecard from Charlie Martin’s record-breaking 59 he shot last week at Highland Country Club. Martin shot a 28 on the front nine and a 31 on the back nine. Contributed photo

http://lagrangenews.com/wp-content/uploads/sites/37/2016/07/web1_Martin3.jpgThe scorecard from Charlie Martin’s record-breaking 59 he shot last week at Highland Country Club. Martin shot a 28 on the front nine and a 31 on the back nine. Contributed photo