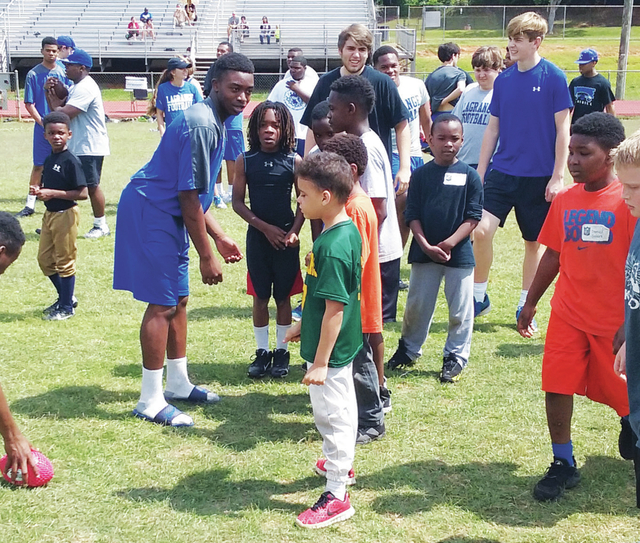 A youth basketball camp is being held at the Mike Daniel Recreation Center this week, and the instructors include LaGrange High coaches, as well as members of the team.

The Blue Star Basketball Camp, which has been going on for more than 20 years, kicked off on Monday and wraps up today, and boys and girls ages 5 to 15 are participating.

For 20 years, the camp was run by former head coach Mike Pauley.

When Pauley stepped down following the 2014-2015 season to become the LaGrange High athletic director, Veal took over as head coach, and he decided to keep offering the camp.

Veal has involved his high-school players in the camp, and five of them have served as instructors this week.

Veal will be counting on those players to be the leaders of the team this coming season, and he figures having them come out and take on positions of responsibility during the camp can only help them.

“I always like to have our current seniors, and sometimes our underclassmen, get in here,” Veal said. “You’ve got to have leaders within a basketball program, and on a team, and we’ve been fortunate to have that.”

Among the players is Duckett, a guard who had a big junior year and will be counted on to be one of the top players next season.

Duckett, who also helped out at the camp last summer, enjoys being around the young players.

“I like sharing my knowledge, and what I learned about the game, so they can be successful on the basketball court,” Duckett said.

Another one of the camp instructors is Stephen Tuck, a coach on the LaGrange High girls’ team, and he’s also a teacher at Whitesville Road Elementary School.

“For me, this is in my element,” Tuck said. “I love working with this age, because you get to see the joy they have playing basketball.”

Blake Craft, an assistant coach for the Grangers, said he and the other instructors have been trying to provide the campers with a solid foundation in the sport, while also making sure they have a good time.

“If they’re not having fun, you’ll lose them,” Craft said. “You’ve got to make sure they’re having fun.”

Craft said the campers particularly enjoy working with the players and getting to know them.

“When they come to a LaGrange High game, they see coach Kenan, or coach Gabe,” Craft said. “They look forward to seeing them.”

Veal has also had guest speakers come in and talk to the campers this week.

Pauley was a guest speaker as well, as was Rich Fendley, who is a football coach at Heard County and the husband of LaGrange girls’ coach Jan Fendley.

Each of those people had an interesting story to tell, including Leak, who has overcome a broken leg and four surgeries to return to college basketball this upcoming season.

“It’s great to have somebody from six, seven years ago come up here and talk about LaGrange High basketball,” Veal said. “You have Don with his story. It’s motivational. Never give up.”

LaGrange High assistant coach Royal Thomas talks to some of the players on Wednesday during the Blue Star Basketball Camp at the Mike Daniel Recreation Center. Kevin Eckleberry | Daily News

http://lagrangenews.com/wp-content/uploads/sites/37/2016/07/web1_camp2-1.jpgLaGrange High assistant coach Royal Thomas talks to some of the players on Wednesday during the Blue Star Basketball Camp at the Mike Daniel Recreation Center. Kevin Eckleberry | Daily News