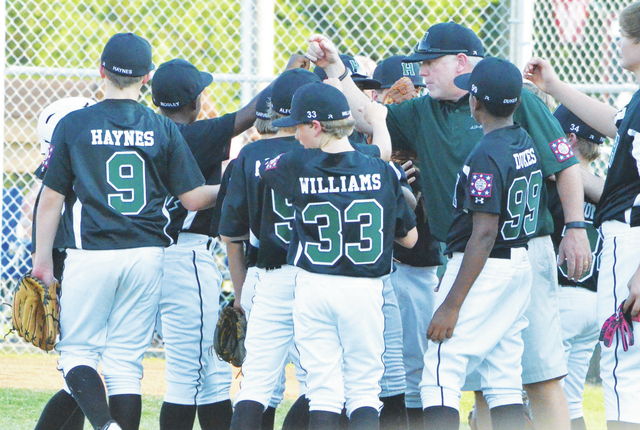 HOGANSVILLE – Here they are again.

A year ago, the Hogansville 11-12-year all-stars made it through to the final four of the Dixie Youth Baseball state tournament.

Hogansville got to within one victory of the state championship before falling short against Albany.

Flash forward a year, and once again Hogansville is one of the final four teams standing in the state tournament.

Will the outcome be different this time?

If Hogansville continues to play like it has throughout the summer, there’s a good chance the answer will be yes.

Hogansville is 6-1 in tournament play this summer, and it went 3-0 in the first two days of the state tournament last weekend, outscoring its opponents 33-3 in the process.

Now, Hogansville is perhaps three wins away from being crowned state champ and earning an invitation to the Dixie Youth Baseball World Series in August.

“If we play like we did last weekend, then there’s no doubt we’re going to win three games, and we’ll be Georgia state champs,” Hogansville head coach Scott Thompson said. “But we can’t go over there and show up either. We know we have to play well.”

The state tournament began with eight teams, and they were divided into two four-team pools, and the top two finishers on each side qualified for the semifinals.

Hogansville won its pool with West Macon finishing second, and Wrens and Albany were the top finishers in the other pool.

Troup National finished tied for first place in its pool with Wrens and Albany with a 2-1 record, but it was left out because of the tiebreaker rules.

Hogansville will play Albany at 5:45 p.m. today, and if it wins that game, it wouldn’t play again until Saturday at 11 a.m.

If Hogansville loses to Albany, it would play an elimination game later today.

The tournament continues through Sunday when a champion will be crowned.

Hogansville’s ideal scenario is to win three games without a loss and celebrate the state title on Sunday afternoon.

If Hogansville loses a game, it could end up having to play as many as five games in three days to win the title.

A year ago, Hogansville did play five semifinal games, and it finished with a 3-2 record with losses to Troup National and Albany in the title game.

“That’s our goal,” Thompson said of the prospect of going 3-0. “We’re going over there to win game one, but we’re also not putting all our eggs in that one basket to say we’re going to burn everything to win our first game.”

Hogansville’s summer journey began in June with the District 1 tournament, and it captured the top spot with a 3-1 record.

All four games were competitive, and the three games with Troup National were each decided by one run.

Hogansville received outstanding pitching in the district tournament and played stellar defense, and it came through with some clutch hits along the way.

Last weekend, Hogansville was in Macon for the start of the state tournament, and there was no suspense.

Hogansville outscored its three opponents 33-3, and that spread would have been even more one-sided if the games hadn’t ended early because of the run rule.

“We really started to put the bat on the ball,” Thompson said. “I’m not saying that every hit was a hard-hit ball, but we gave ourselves a chance. We were giving good approaches at the plate. We were hitting the ball well. We put 10 runs up I think twice in one inning.”

Hogansville followed that up with a 10-0 thumping of Norcross, with Hartley, Alford and Haynes combining for the four-inning shutout.

Mosley had a two-run double, and Haynes, Jacob Karvelas and Hartley also had RBIs in a six-run first inning.

Lee and Alford had RBI hits later in the game.

Hogansville capped off its dominant weekend with an 11-1 victory over Seminole County, and Zack Thompson pitched all four innings.

Thompson also got it done at the plate, going 2-for-3 with three RBIs, and Williams and Hartley each had two RBIs.

Mosley hit a home run for Hogansville, and Martin had an RBI.

In its final practice session on Thursday before the semifinals, Hogansville was on the field for a few hours, just fine-tuning a few things and getting prepared for the weekend.

Thompson said everyone is ready.

“We just had a light workout today,” Thompson said Thursday evening as the team went through batting practice. “We’re good to go. We just want to get some swings in, do a little bit of infield, outfield. They’re confident. They’re ready to go.”