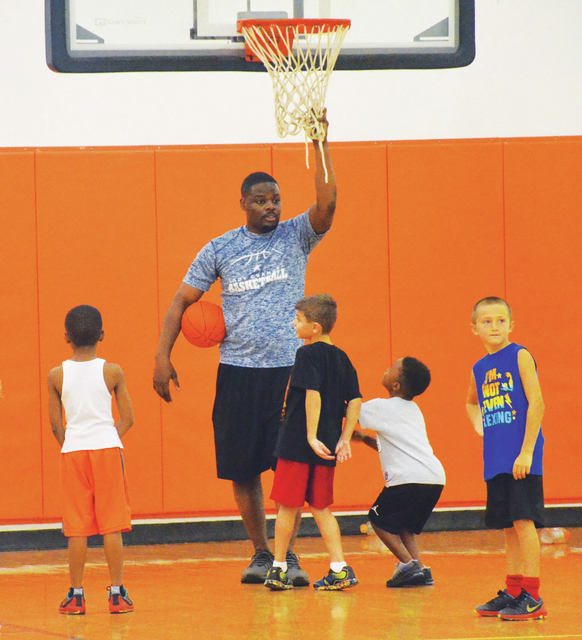 Fendley is expected to give birth at about the same time the season begins, so the school has planned accordingly.

Stephen Tuck, an assistant coach the past few seasons, will lead the Lady Grangers while Fendley is unavailable, and he has been busy this summer getting ready for that responsibility.

“This summer, (Fendley) basically handed the reins over to me, and let me handle the whole summer, as far as calling the plays, deciding who goes in,” said Tuck, who this week is helping out with the Blue Star Basketball Camp. “It was good getting that experience, and just understanding the varsity game.”

Tuck was an assistant coach on last season’s team, so he’s familiar with most of the players, and the summer has allowed him to get to know the newcomers, including some freshmen he believes will make an instant impact.

“It was huge for them to get that experience, to learn the speed of the game, and be able to play with their teammates,” Tuck said. “I think they’re going to be really, really good.”

Tuck, an Albany native, has made his home in LaGrange for a decade now.

He arrived at LaGrange College in 2006, and he was a member of both the basketball and football teams during his time at the school.

When he left LaGrange College, he was the football program’s all-time leading wide receiver with 1,275 yards, and he was the top receiver on the 2008 team that won a conference championship and made the program’s first and only trip to the NCAA Division III national playoffs.

When it came time for Tuck to choose a major, he decided to make early childhood education his focus, and he began his career as a teacher in 2011.

This coming school year, Tuck will be teaching at Whitesville Road Elementary School, and when the school day ends he’ll be working with the LaGrange basketball team.

For Tuck, it’s the best of both worlds.

“I tell people all the time, I enjoy being able to teach that age, and be able to coach,” Tuck said. “I’m able to make an impact on the younger kids, and the older kids at the same time.”

Tuck spent a lot of time with the team this summer.

In addition to practices at the school, the Lady Grangers also played a handful of games.

The Lady Grangers are coming off an up-and-down season.

They had some positive results, but they struggled a bit down the stretch and didn’t qualify for the state tournament after falling in the quarterfinals of the region tournament.

Most of the key players are returning, and Tuck said the key will be making sure everyone is in the best position to succeed.

“You’re talking about a team with a lot of talent,” he said. “Right now it’s just putting them in spots where they’re going to be successful.”