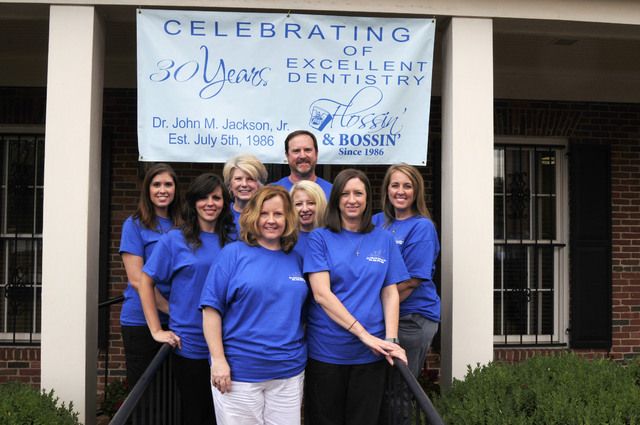 LaGRANGE — When LaGrange native Dr. John M. Jackson Jr. finished dental school at the University of Alabama at Birmingham, he briefly considered staying in Birmingham, but ultimately decided he wanted to return home.

“LaGrange, I felt like, was a great place to raise kids, raise a family, so that’s why I came back,” Jackson said.

On July 5, Jackson celebrated his 30th anniversary having a practice in LaGrange. He has no regrets about his choice to set up shop in his hometown.

“I feel like I’ve been blessed by coming back to LaGrange,” Jackson said. “It’s a great place.”

Dentistry, however, wasn’t his first choice of career when he went to Auburn University as an undergraduate.

“When I went to Auburn, I was going to be the next Marlin Perkins or Jack Hanna — I was a zoology major,” he said. “And after the first quarter I went to talk to my advisor, and I said, ‘What job opportunities am I going to have when I get out?’ And he said none, so I thought, ‘Well, OK, I might want to have a family and kids one day, so that may not work out.’”

After his meeting with the advisor, Jackson went to see one of his two cousins who are dentists, and he strongly encouraged Jackson to think of dentistry. Jackson also had two uncles who were dentists, one in LaGrange, Dr. Vance Jackson.

The conversation with his cousin “changed my path, and the thing is, you don’t know if you’re going to like that really until you get into it,” Jackson said. “And thank goodness that has worked out very well for me.”

After finishing at Auburn, Jackson ran into a LaGrange connection as he was considering where to attend dental school.

“The director of admissions (at UAB) graduated from LaGrange College,” Jackson said. “So we kind of hit it off, and I ended up going to UAB, so it’s kind of funny with that LaGrange tie.”

When he came to LaGrange to practice, he first shared a space downtown with Dr. John Vollenweider, which Jackson said was tight quarters for two dentists. After about a year practicing, he married his now wife, Cindy, whom he had met at Auburn.

Five years after returning to LaGrange, he opened his practice on South Lewis Street, where he still operates. On July 5, his staff surprised him with a party to mark 30 years practicing in LaGrange.

“I tell you, my staff — I’ve got the best staff I’ve probably ever had,” Jackson said. “I am fortunate that they have been with me a long time. My assistant Tina Knight has been with me since August of ‘88. Both my hygienists were assistants of mine, so that has worked out very well to have employees who are very loyal and hopefully enjoy it. We are very blessed in that.”

Jackson and his wife have two sons. Their youngest son, James, lives in Dothan, Alabama, and works for Georgia Pacific. His oldest son, John Morgan III, is following in his father’s footsteps, currently attending The Dental College of Georgia at Augusta University and set to practice with his father when he graduates next year.

“He’s going to be coming in in June, and I look forward to that; it’s going to be great,” Jackson said. “… I’ve had several patients say that’s a nice legacy to leave. I don’t think of it that way, but it is kind of neat to be able to practice with him a while and maybe transfer patients to him.”

Though he doesn’t feel ready to retire soon, Jackson knows that time flies.