He wants to be there for his community 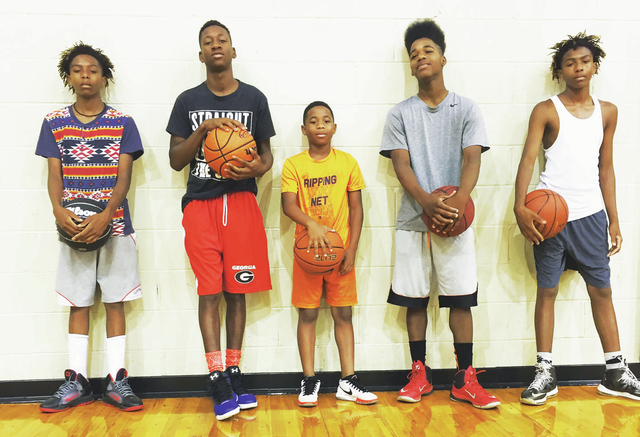 HOGANSVILLE – He had a decision to make.

Reggie Jackson, who was one of the state’s best players during his time at Callaway High, was in the midst of a successful professional basketball career when he suffered what he called “a pretty severe injury.”

“We had a great season (in 2013 in Portugal),” Jackson said. “We won three trophies, and I was expecting so much for that upcoming season. I came home, I was playing in a summer league, and I tore my groin. I had to sit out a whole year.”

Jackson recovered and said he “got back to 100 percent,” and he had an opportunity to head overseas and resume his career.

At that point, though, Jackson felt pulled in a different direction.

While he was rehabbing, getting his body back in playing shape, he began thinking about what he could do to help young people in his hometown of Hogansville.

“That year I was sitting out, I would go to watch some rec ball games,” Jakson said. “And I was just blown away at how talented those kids were. It made me think of all the amazing players I played with, who just didn’t get a whole lot out of life due to the decisions that they made. Most of them didn’t have a father figure around.”

He was healthy again, and if he’d chosen to play he would have had plenty of teams seeking his services, but Jackson didn’t want to leave his hometown.

“It was a pretty severe injury, but I feel like I got back to 100 percent,” Jackson said. “Physically I could play. But I really knew in my heart God was kind of standing between me and going back overseas.”

He wanted to help, he wanted to do something for the young people of Hogansville.

It would mean putting a halt to his professional career, but that was a step he was ready to make.

“I finally just stopped putting it off,” he said. “I was going to take the first step. I kind of knew this was what I was supposed to be doing.”

Jackson created a new organization, he decided to call it Future Shepherds, and it opened for business last fall.

The goal, according to the organization’s Facebook page, is to “provide mentoring, academic assistance and athletic training to student-athletes in grades fifth through 12th.”

Basketball would be his way to reach the young people, but the organization is about much more than sports.

Jackson wants to help the boys and girls achieve everything they want to in life, and he’s hoping Future Shepherds will help make that a reality for the youth of Hogansville.

He meets with the boys and girls during the week at a local gym, and while basketball is obviously a big part of it, he’s there to offer assistance and mentorship in other areas as well.

“I want to help them, whatever they want to be,” Jackson said. “I want to create a platform for those kids to reach their goals. To me, basketball is only a tool. These kids are smart kids. They can do so many other things besides basketball.”

When Jackson looks at the boys and girls he works with, he sees “so much potential.”

“I believe it’s a gold mine,” he added. “There are so many talented kids. All they need is a little direction. That’s my goal with this program is to try to lead these kids in the right direction, and help them reach their God-given potential.”

Jackson is committed to Future Shepherds, and he wants to see it grow and thrive, and he’s encouraging other professionals in the area to help out as volunteers.

Jackson said he’s looking for “peer tutors, social media coordinators, photographers, videographers and writers” to help out with the organization.

“I see them growing up to be future leaders of this community,” Jackson said.

Jackson is a Hogansville success story.

He had a gift and a love for basketball growing up, and he was an all-state player during his time at Callaway, and he was and remains the school’s all-time leading scorer.

He went on to play college basketball at Southern Union and Duquesne University before heading overseas to play pro basketball.

Jackson is grateful to have had the support of two loving and helpful parents who were always ready and willing to do whatever they could for their children.

Jackson’s brother, Bryan Jackson, has enjoyed a high level of success as well.

Bryan Jackson, who was also a basketball standout at Callaway, is making his way in the music business, and he has released some popular and well-received records.

Reggie Jackson said it’s not an accident that he and his brother have both accomplished so much.

“I think the main reason that my brother and I were able to accomplish those things is we had a really good support system,” Reggie Jackson said. “My parents, getting off work late in the evening and driving me all the way to Atlanta to practice. They made a lot of sacrifices for us.”

He knows not everyone is fortunate enough to have the upbringing he and his brother had, and he’s hoping Future Shepherds will help provide that support system.

“I see so much potential in these young men,” he said. “Just to be able to offer them the things I learned, it means a lot to me.”

OF NOTE: To find out more about Future Shepherds, go to futureshepherds.org.

Reggie Jackson, who played basketball in England and Portugal, is enjoying being back in his hometown of Hogansville. Kevin Eckleberry | Daily News

http://lagrangenews.com/wp-content/uploads/sites/37/2016/07/web1_Jackson1.jpgReggie Jackson, who played basketball in England and Portugal, is enjoying being back in his hometown of Hogansville. Kevin Eckleberry | Daily News

Reggie Jackson huddles with some of the young players he’s mentoring through the Future Shepherds organization. Contributed photo

http://lagrangenews.com/wp-content/uploads/sites/37/2016/07/web1_jackson3.jpgReggie Jackson huddles with some of the young players he’s mentoring through the Future Shepherds organization. Contributed photo

The participants in the Future Shepherds organization are learning about basketball and life. Contributed photo

http://lagrangenews.com/wp-content/uploads/sites/37/2016/07/web1_jackson6.jpgThe participants in the Future Shepherds organization are learning about basketball and life. Contributed photo