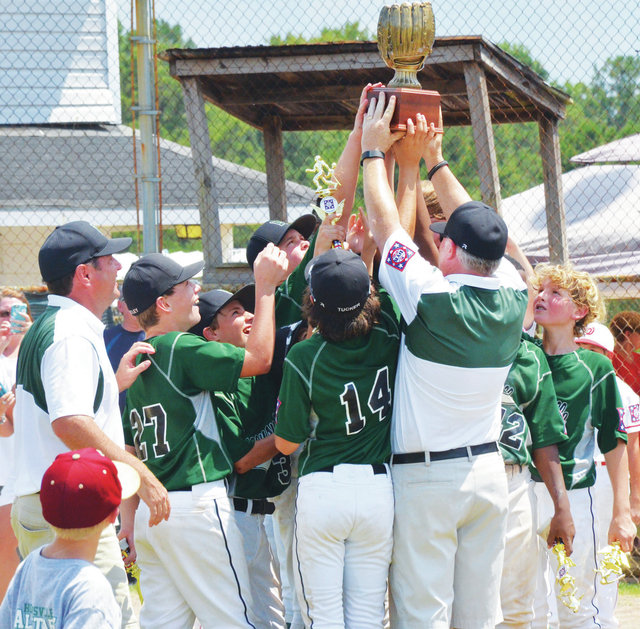 Now, the Hogansville all-stars will look to bring home the most prestigious trophy of them all for teams participating in Dixie Youth Baseball.

Hogansville, after beating Wrens 10-9 on Sunday to win the state championship, will be one of 12 teams participating in the Dixie Youth Baseball 11-12-year-old World Series that will be held in Laurel, Miss.

The tournament gets under way on Aug. 6 and goes through Aug. 11 when the championship game will be played.

Hogansville, which is 9-1 in tournament play this summer, would love to be the team celebrating when the final game has been played.

“Once we get there, our motto’s going to be, why not us? If we’re there, why not us?,” Hogansville head coach Scott Thompson said following Sunday’s game. ” We’ve got a good team. We’re a great defensive team. We’ve shown we can put the bat on the ball. We scored 10-plus runs every game (at the state tournament). If you score 10 runs, you should score every game. We’re going to be tough to beat.”

Hogansville, or Team Georgia as it will now be known, will be joined in the World Series by the state champions from Tennessee, South Carolina, Virginia, Louisiana, Florida, Texas, North Carolina, Mississippi, Alabama and Arkansas.

Also, the host community will have a team in the tournament.

Hogansville’s road to the World Series began in the district tournament in June.

Hogansville had four close games in that tournament, including three one-run games against Troup National, and it went 3-1 to capture the title.

Then in the state tournament, Hogansville was dominant, winning all six of it games, four of them via the run rule.

Hogansville will have a little less than two weeks before it plays its World Series opener against the champion from Tennessee.

“We’ll give them a break, and then we’ll get right back at it,” Thompson said.

The Hogansville all-stars hold up the trophy after winning the state championship on Sunday. Kevin Eckleberry | Daily News