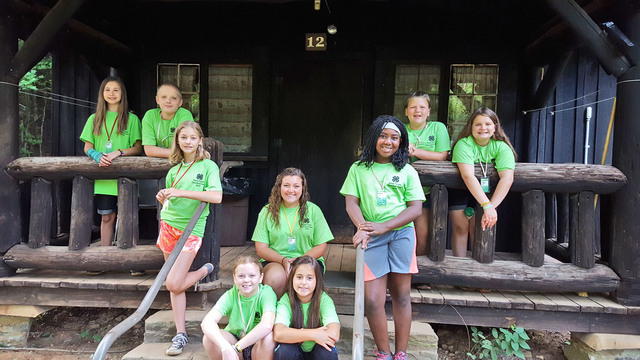 4H students spent the week learning about the forests and streams and the animals that live there. They were also given the opportunity to practice archery, scale the climbing wall, fly on the Flying Squirrel, go down the zip line, swim in the pond and falls, and learn about wilderness survival.

In the evenings, the students were involved in a talent show, costume contest, campfire skits and s’mores. There were group dinner cookouts and a day of water games with a giant Slip’N Slide.

Both the boys and girls cabins won the Clean Cabin Clover Award which is given out daily to the cleanest cabin. They were also assigned service projects including kitchen patrol, and cleaning the recreation hall and bath houses.

Troup County Cloverleaf campers and teen leader pose for a photo after a week of summer camp.

http://lagrangenews.com/wp-content/uploads/sites/37/2016/07/web1_web0726CLcamp.jpgTroup County Cloverleaf campers and teen leader pose for a photo after a week of summer camp.