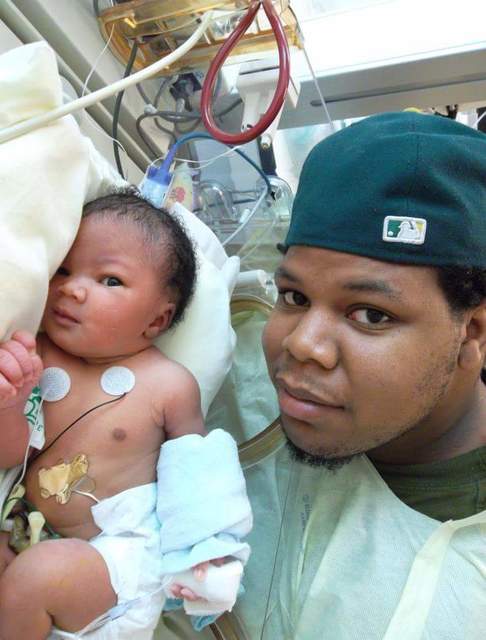 LaGRANGE — Not a day went by where 25-year-old Quentin Williams, or “Quint” as his family and friends called him, was not smiling and laughing — and encouraging others to do the same.

“He was one of the most funniest guys I knew,” said friend Keyawna Hammett. “No matter how bad your day was going, I promise you it would turn around when he came around. He kept a smile on his face and everyone else’s face too.

Jasmine Ware, one of Williams’ best friends, shared the sentiment.

“Whenever you saw him he was laughing, joking and dancing,” she said . “… All he wanted was to see everyone smiling and enjoying life. He never tried to hurt anybody. He loved everybody, and he gave everyone a chance to be his friend no matter what anyone said.”

Two of his biggest passions in life were football and music, said Ware.

The 25 year old released two rap songs online, one prophetically titled “City of Crime,” which talks about violence, gangs and drug use in LaGrange. Ware said he also rapped in a group with his brothers.

But those activities always came in a distant second to hanging out with his children. Ware was also the mother of his two children: LaRaina Cynese LaShaye Williams, 4, and JaVance’ Anderson Ware, 2.

Sadly, Williams’ rap song played out in real life about 7 p.m. Sunday in the first block of North Cary Street as he was standing on a sidewalk less than a block away from his home.

Investigators with the LaGrange Police Department followed several leads and quickly arrested the person they believe is responsible for Williams’ death.

Jerry Kahmond Jamal Carston, 15, was taken into custody about 11 p.m. Monday at a home in the 300 block of Revis Street, said LaGrange police.

The teen is charged with murder, possession of a firearm during the commission of a crime and by a person under the age of 18, and participation in criminal street gangs. He is charged as an adult and was taken to the Regional Youth Detention Center in Columbus, according to police investigators.

According to documents obtained by the LaGrange Daily News, this was not the first time Carston has been in trouble with the law. Earlier this month he was wanted by police for an active juvenile pickup order signed by Troup County Juvenile Court Judge Michael Key, a police report states. It did not state what the warrant was for.

The document shows on July 6, two days after Carston turned 15 years old, he was spotted by LaGrange police officers inside a black Nissan Altima on Hamilton Road.

After a brief chase, Carston bailed out of the car on Wright Street, officers said. He was quickly captured on Cannon Street and taken into custody.

According to the report, Carston had “a strong odor of green marijuana” but nothing was found on him. The teen was escorted to the LaGrange Police Department where he was charged with obstruction, the documents states. Carston was then transported to the RYDC in Columbus.

At some point between July 6 and Sunday, Carston was freed from the facility. The teen then allegedly confronted Williams on Sunday evening and is accused of fatally shooting him.

Now family and friends are left to mourn their loved one and cherish the memories of a life taken too soon.

“He was a great father, but most of all a great person all the way around,” said Hammett. “I will truly miss this guy.”

“It hurts that he’s gone so soon and his kids are so young,” Ware wrote in an email. “But we’ll always remember his smiling face and crazy jokes. … He left behind the greatest gifts. … He’ll live in our lives forever. He was definitely loved by everyone and truly will be missed.”

Quentin Williams plays with one of his children. He loved hanging out with them, said Jasmine Ware, mother of their 4-year-old daughter and a 2-year-old son.

http://lagrangenews.com/wp-content/uploads/sites/37/2016/07/web1_Quentin2.jpgQuentin Williams plays with one of his children. He loved hanging out with them, said Jasmine Ware, mother of their 4-year-old daughter and a 2-year-old son.

Quentin Williams poses with one of his children shortly after the child’s birth in this undated photo. The 25-year-old man was fatally gunned down on Sunday.

http://lagrangenews.com/wp-content/uploads/sites/37/2016/07/web1_Quentin1.jpgQuentin Williams poses with one of his children shortly after the child’s birth in this undated photo. The 25-year-old man was fatally gunned down on Sunday.