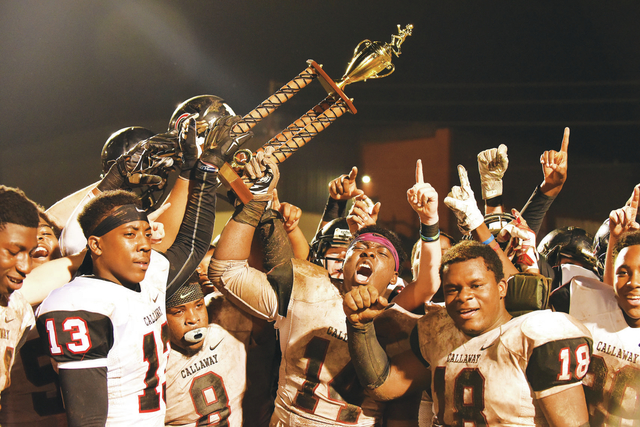 HOGANSVILLE – As the Callaway Cavaliers hit the field on a sweltering Monday afternoon, it marked the opening day of preseason football practice.

In reality, though, the process of preparing for a new season began way before that.

The 2015 season came to an end for Callaway with a loss to Westminster in the second round of the Class AAA state playoffs in November.

Not long after that, the Callaway coaches and players turned the page and began looking ahead to a new season that is now less than a month away.

This week marks another step in the process.

First it was the offseason strength and conditioning program, and then came the two weeks of spring practice, and that was followed by a busy and productive summer that included daily workouts at the school as well as numerous camps.

This week, the Cavaliers have been on the practice field for two hours each day for the conditioning portion of preseason practice.

On Monday, another phase begins with the start of full-contact practice, and soon enough, Callaway will be on the field for a preseason game on Aug. 12 against Northside.

Then on Aug. 19, it’ll be time to open up a new season as Callaway plays the rival LaGrange Grangers.

“We started way back in January, and it seems like yesterday,” LaGrange head coach Pete Wiggins said. “We talk each day about one day at a time, and getting better one day at a time. And it’s on us. It’s not long until our first game.”

For the first week of practice, teams are limited to two hours each day by the Georgia High School Association.

Wiggins said the key is to make the most of that time.

“Right now we’ve got a two-hour time frame, and we script it out, and the kids know what to do,” Wiggins said. “In between sessions, we try to move fast, and still give the kids water breaks, and make sure we’re taking care of them, and still try to have the tempo to simulate game-time speeds as best you can, and that’s always hard to do at practice. But I’m proud of the kids’ effort and enthusiasm, and we’ve just got to keep coming out here each day and working to get better.”

The Cavaliers are following the same practice routine as previous years, and that makes sense considering the success the team has had under Wiggins, who took over the program in 2005 and has a career record of 91-39.

Since 2008, the Cavaliers have won at least one playoff game every year except for 2011, and they’ve won 10 games or more five times over the past eight years.

A year ago, Callaway won a region championship and finished with a 10-2 record, and it lost to eventual state champion Westminster in the second round of the state playoffs.

Many of the players responsible for that success a year ago have graduated, including four men who will be playing college football this fall.

There are plenty of talented and veteran players returning, though, including quarterback and wide receiver Braylon Sanders, sophomore offensive lineman Keiondre Jones who has already developed into one of the state’s most heavily recruited players, quarterback and defensive standout Dylan Johnson, tight end and linebacker Michael Freeman, defensive lineman Keegan Woods, and offensive linemen Lawrence Thompson and John Curtis.

Callaway also has an influx of gifted younger players who are ready to step into the lineup this season.

Following Callaway’s spring game in May, Dylan Johnson said the incoming freshmen showed they are ready to make an impact.

“I think the main thing is our freshmen came up this year and they’re working their tails off,” Johnson said. “They feel like they belong here. They practice, and they’re working. They’ll help get us better every week. It’ll show on Friday nights.”

Callaway quarterback Dylan Johnson runs with the ball during practice this week. The Cavaliers will wrap up their first week of preseason practice today. Kevin Eckleberry | Daily News

http://lagrangenews.com/wp-content/uploads/sites/37/2016/07/web1_CHS2-1.jpgCallaway quarterback Dylan Johnson runs with the ball during practice this week. The Cavaliers will wrap up their first week of preseason practice today. Kevin Eckleberry | Daily News