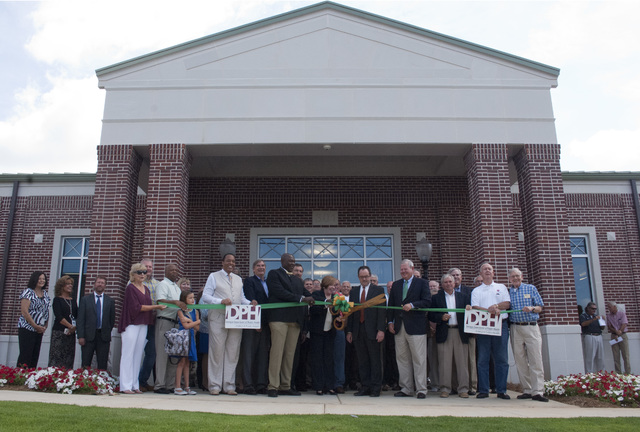 LaGRANGE — The employees of District 4 Public Health held an open house and ribbon cutting ceremony Friday at their new office on Main Street.

The 14,100 square foot office building houses 54 employees and serves as the regional headquarters for the state Department of Public Health. Call centers, emergency operations and a host of other services are offered at the building, where employees coordinate and oversee health departments in the 12-county District 4.

Keeping District 4 headquartered in LaGrange was a priority for local officials, and they’re hoping the new building will be part of something bigger in downtown LaGrange’s south side.

“Several years ago, it was threatened that (District 4 Public Health) was going to move to Newnan … but through a lot of hard work, we were able to keep it in Troup County,” said LaGrange Councilman Willie Edmondson, who is also the chairman of the county’s health board. “Here, we have 54 employees that are going to be in downtown LaGrange every day. We have approximately 300 from other counties that are going to be coming in and out every day, which will really enhance downtown.”

“To see this property transformed, revitalized, re-used is very exciting,” he said of the site, where a fire station once stood. “We have some other plans for some other areas here on the south side of downtown, and I think they are going to be further confirmation of our willingness to invest in this area of our downtown.”

The project, Thornton said, would not have been possible without the support of the Callaway Foundation, which owned the land and deeded it to the Downtown LaGrange Development Authority. The foundation also donated $1.2 million toward construction and provided financial assistance in demolishing the old fire station.

Callaway Foundation President Speer Burdette said the foundation is aiming to partner with the city to revitalize the south side of downtown LaGrange. He mentioned the former Westbrook Tire building that sits across the street from the new public health building, and noted that the foundation also owns that building and has future plans.

“I like to call this the gateway to the south side of town, and this is really the kick-starter to making that happen,” Burdette said. “When you have such a beautiful facility like this, with people that are going to be here, we can’t tolerate what’s next door (the old Westbrook building). We’re working on something and can’t really talk about it just yet, but this whole south end of town is about to undergo a revitalization.”

Edward Smith, a member of the Downtown LaGrange Development Authority, thanked the foundation for their support.

“We as a community continue to be indebted to the Callaway Foundation for their support, and the city of LaGrange as well,” Smith said. “They’re a dynamic duo working together to better downtown, and that’s what our organization is about.”

The building was designed by LaGrange architect Skip Smith, and is modeled after the Coleman Library on Lincoln Street, and is designed for future expansion. About 3,000 square feet of porch space wraps around the two far ends of the building and can be enclosed at a later date if the district needs the space. Currently, the building includes conference rooms, office space, a workout center, a lactation room, call center and emergency operations center.

The building and land are owned by the Downtown LaGrange Development Authority, and the state has signed a 20-year lease. The building costs about $3.6 million to construct.

Matt Knopp of LaGrange hangs a picture of his mother, Elizabeth Dodson, in the newly named Elizabeth Dodson Women and Infant Care Call Center at the District 4 Public Health building on Main Street on Friday. Dodson worked for the call center for nearly 30 years and died in August 2014, six months shy of retirement.

http://lagrangenews.com/wp-content/uploads/sites/37/2016/07/web1_PublicHealth02WEB.jpgMatt Knopp of LaGrange hangs a picture of his mother, Elizabeth Dodson, in the newly named Elizabeth Dodson Women and Infant Care Call Center at the District 4 Public Health building on Main Street on Friday. Dodson worked for the call center for nearly 30 years and died in August 2014, six months shy of retirement.

Officials cut a ribbon to mark the opening of the new District 4 Public Health headquarters on Main Street on Friday. The building houses 54 employees and is 14,100 square feet.

http://lagrangenews.com/wp-content/uploads/sites/37/2016/07/web1_PublicHealth01WEB.jpgOfficials cut a ribbon to mark the opening of the new District 4 Public Health headquarters on Main Street on Friday. The building houses 54 employees and is 14,100 square feet.