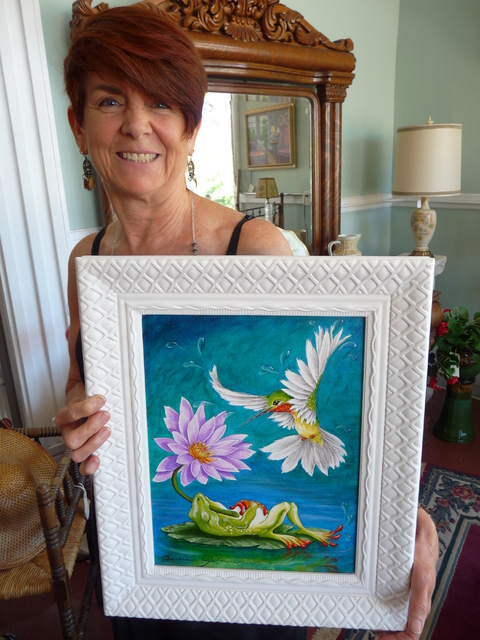 Laura Gfelner’s painting of a hummingbird hovering over a frog napping on a water lily will be used on festival posters, T-shirts and programs.

Gfelner is a self-described “valley girl” who grew up in the Simi Valley area in California. While her husband Mike worked as a camera operator in the movie industry, Laura home-schooled their two children and developed her lifelong love of art. In 2010, the Gfelners first visited Georgia when Mike was working on the TV show “Drop Dead Diva.”

“We fell in love with the area,” said Gfelner. “We knew then that we would move here, but Mike’s work kept us traveling. It wasn’t until June of 2015 that we were able to pack it all up and drive out here to live.”

The Gfelners settled in Peachtree City, partly for the extensive walking and bicycling trails, but mainly because it is near their church in Tyrone. Gfelner does “prophetic painting” during church services.

“We got hooked up with a great church, where we just knew we were with family,” said Gfelner. “God gives us pictures that are meant for other people. My paintings carry messages that might not come through with words. It’s one of the main reasons why I paint.”

When she paints in church, her work often touches the life of someone else in the room.

“Images that come to me in church often carry over as special to another person,” she said. “My painting might bring laughter, or tears, or comfort and confirmation. It is art with a special purpose. With each painting, God releases something.”

A friend in Peachtree City who was familiar with the Hummingbird Festival’s annual art competition encouraged Gfelner to send in a submission. Mary Stewart, festival volunteer coordinator and a member of the art selection committee, said Gfelner’s painting was one of 15 submissions.

“We had a lot of great submissions again this year,” said Stewart. “It was a difficult decision. Laura’s painting shows outstanding talent, and everyone on the committee loved the whimsy and bright colors.”

As in past years, graphic designer Leah Leidner will embellish an image of the painting with lettering and other graphics before sending it off for printing. T-shirt, posters and brochures will be available at the arts and crafts festival, which is held the third weekend in October in downtown Hogansville. This year is the 19th annual Hummingbird Festival.

When her painting was chosen, Gfelner decided to rent a vendor booth at the festival, where she will sell her other works. In addition to painting, she makes stained glass and sculptures using “clay mache.”

“I’ve branched out with other types of art since moving here,” Gfelner said. “But I’ve loved art and color all my life.”

Gfelner’s original framed painting will join artwork from past festivals on the walls of City Hall in downtown Hogansville.

Laura Gfelner of Peachtree City holds her painting of a hummingbird hovering over a frog napping on a water lily, which will be used on posters, T-shirts and programs for this year’s Hogansville Hummingbird Festival.

http://lagrangenews.com/wp-content/uploads/sites/37/2016/08/web1_web0802GfelnerArt.jpgLaura Gfelner of Peachtree City holds her painting of a hummingbird hovering over a frog napping on a water lily, which will be used on posters, T-shirts and programs for this year’s Hogansville Hummingbird Festival.