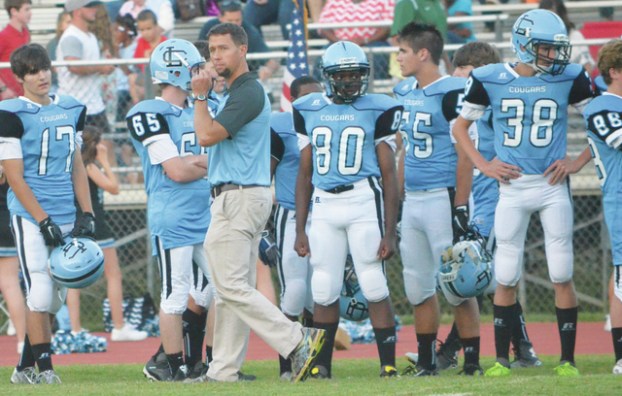 LAGRANGE – One championship was nice, but two would be even better.

In November, the Lafayette Christian School Cougars broke through for a state title after coming close the previous two years.

After reaching the semifinals of the Georgia Independent Christian Athletic Association eight-man state football playoffs in 2013 and 2014, Lafayette Christian claimed the state crown a year ago with a win over Central Christian in the championship game.

While the Cougars were hit hard by graduation, the lofty goals remain the same, and they’ll head into a new season on Aug. 19 with the same lofty expectations.

“We’re not cocky, but we think that we can do it again,” said Jess Hill, one of six seniors on the team. “We lost players, but we’ve got new players. They’re all good.”

As part of the preparation for a new season, the Cougars held their annual camp last week.

The players and coaches spent the week at the school, practicing twice a day, and participating in other team-bonding activities.

It’s not a vacation.

The players work hard, oftentimes sweating it out during the hottest times of the day.

One of the seniors, Josh Shepherd, said the camp is designed to be difficult, to push the players to the limit.

“Who’s willing to take so much, to take the pain, who can fight through the adversity?,” Shepherd said. “That’s what this camp is about.”

This is the fourth consecutive summer Lafayette Christian has held the camp.

In the previous three years, the Cougars went on to enjoy an exceptional season, reaching the state semifinals twice and winning it all last fall.

Senior Jonathan Parham, who has been participating in the camp since the summer before his freshman season, appreciates the value of it.

“It’s very important,” Parham said. “We get to come together as a team, and just get better. We get out here on the field in the morning, working hard, and just striving to be the best.”

Hill said this year’s camp helped everyone on the team, veterans and newcomers alike.

“It’s important,” Hill said. “All of us have gotten so much better since we started. You get better so quick, because you do two-a-days, and you just get closer a team. We spend so much time together out here.”

Hill has been through the camp four times now, and looking back to his first one, he remembers being impressed by the leadership shown by the seniors and how much he helped him.

Now that he’s one of the “old” guys, Hill has done his best to be a role model for the underclassmen.

“I remember when I was a freshman, we had great seniors who set an example for me,” Hill said. “So, it’s good to do the same thing for the younger people.”

Shepherd said head coach Nate Shaw and the other coaches have made sure to remind the players that what they did last year doesn’t mean anything now.

“The other day, the coach got mad, because he felt like we were a little complacent,” Shepherd said. “He fixed that real quick. We can’t get complacent this year. We’ve got to keep striving.”

Shaw, who is in his second season as head coach, said camp week is a critical time for the program.

“We’re looking to see who’s the best,” Shaw said. “If you want to be one of those that gets recognized, you’ve got to put the work in.”

The camp is an indication of how seriously football is taken at Lafayette Christian.

“Being a smaller school, and playing eight-man football, there’s sometimes a mindset outside of the program that says it’s like glorified rec ball,” Shaw said. “But we’re not glorified rec ball. You don’t go and set a kid to an FCS school playing rec ball. It’s varsity football. We take it seriously. There’s nothing egalitarian out here. We’re out here to win. Sports is by its nature unfair. We’re looking to see who’s the best. If you want to be one of those that wants to be recognized, you’ve got to put the work in.”

The Cougars do have some critical players to replace, including Eli Shepherd, who will be playing at the University of Tennessee-Chattanooga on a football scholarship this fall.

The Cougars have plenty of talented and experienced players returning, though, including six seniors.

“They’ve been getting significant playing time since they were sophomores,” Shaw said. “You can’t replace that experience.”

http://lagrangenews.com/wp-content/uploads/sites/37/2016/08/web1_Cougars3.jpgThe Lafayette Christian School Cougars give it their all as they run at the close of practice on Thursday. Lafayette Christian held its camp last week. Kevin Eckleberry | Daily News

HOGANSVILLE – It was a marathon day for the LaGrange Lady Grangers. A seven-on-seven soccer league that has been held... read more