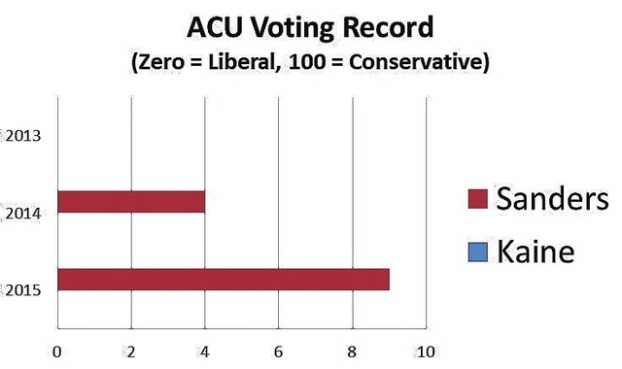 When Virginia Sen. Tim Kaine was picked for the Democratic Party ticket, the media reported that Kaine was a centrist, and Bernie Sanders fans were disappointed. Yet according to analysis by the American Conservative Union, Kaine is actually more progressive than Sanders.

“‘An establishment Wall Street Democrat like Tim Kaine … will do nothing but confirm to progressives that she’s learned nothing from this primary,’” said Jordan Chariton of the pro-Bernie Sanders online talk show called the “Young Turks,” in an interview with Politico Magazine, as reported by Bill Scher.

The conservative publication Newsmax also gleefully reported that some Sanders fans are upset with Hillary Clinton’s selection of Tim Kaine, “preferring a progressive,” as Cathy Burke put it. She even quoted Bernie Sanders as claiming that Kaine is “more conservative.”

Rather than guess at how conservative or liberal Kaine is, wouldn’t it help to actually analyze his voting record?

To do this, I looked at the American Conservative Union — ACU — which looks at two dozen of the most key votes taken in Congress. And here are the results.

In 2013, Kaine’s ACU score was a perfect zero. That meant he was tied for the most liberal voting score in the House or Senate. It was the same story in 2014 and 2015. The ACU usually reserves their greatest scorn for such votes, calling those with zeros “the most liberal” politicians.

Bernie Sanders is clearly a liberal. But so is Kaine, as the data shows. Arguments claiming otherwise are based on perception or conjecture, not evidence.

After his Wednesday speech at the DNC, Kaine tried to appeal to Sanders supporters, according to Morgan Winsor with Good Morning America.

“Democratic vice presidential nominee Tim Kaine said Donald Trump is a ‘threat to everything’ Bernie Sanders and his supporters stand for,” Winsor wrote. “‘They understand who Hillary (Clinton) is and they understand that Donald Trump is a threat to everything they care about,” the Virginia senator said in an exclusive interview with ABC News’ Robin Roberts on ‘Good Morning America.’ He added ‘We got to pull it together to win.’”

Kaine may be considered a centrist in the media, which could help him woo moderates, independents and liberal Republicans. But if you look at the ACU’s voting record, and that of the ADA, his strongest appeal should be to progressives who backed Sanders.

While there is much more that could be said on each point of Calvinism’s TULIP, we have come to final... read more