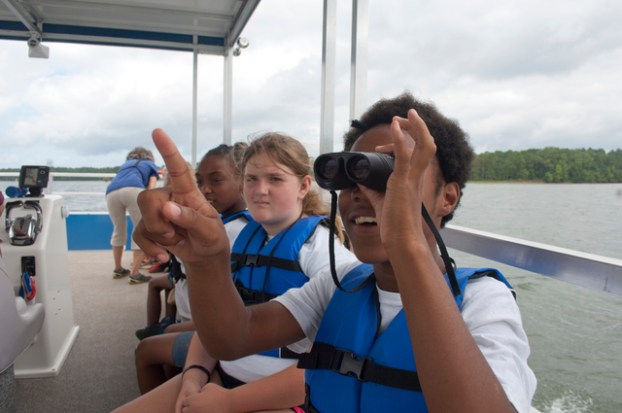 LaGRANGE — It’s been more than a year since the Chattahoochee Riverkeeper launched its floating classroom, the Miss Sally, on West Point Lake, and the program shows no signs of slowing down.

The floating classroom acts as a real-life laboratory to teach students and adults alike about water quality, lake ecology and the health of West Point Lake, said Laura Breyfogle, one of the classroom’s teachers.

“We want people to know that West Point Lake is swimmable, and fishable,” she said Thursday aboard the Miss Sally. “It has a history of being a dirty old lake, and we’re trying to educate people through testing, as well as telling them what Chattahoochee Riverkeeper has done.”

The riverkeeper has had an uphill battle convincing people of the safety of West Point Lake. In the 1990s, the riverkeeper, along with the cities if LaGrange and Hogansville, were involved in a lawsuit against the city of Atlanta for violating federal clean water laws. The plaintiffs won, and today, more than 100 miles Georgia’s longest river are dramatically cleaner, including West Point Lake.

“We want people to know that it’s not like it was in the ’80s, when people called it the dying lake,” Breyfogle said. “We want to encourage use of the lake, and we’re trying to let people know that it’s OK now.”

One of the ways the riverkeeper is hoping to spread its message of conservation and restoration of the lake is through showing community members what’s being done to monitor the water quality of the river and reservoir.

Aboard the Miss Sally on Thursday, about 20 youngsters from the Hogansville Boys and Girls Club strapped on life jackets for a one-and-a-half hour cruise around West Point Lake. For some of the kids, it was their first time on a boat.

After Breyfogle and her counterpart, Hannah Bradfield, armed the students with binoculars, the boat’s captain, Jim West, steered the 46-foot pontoon boat into the lake’s main channel, toward a cypress tree growing out of the water.

Bradfield explained the cypress was planted there by the lake’s first rangers, and not only acts as navigation hazard warnings for boaters, but also homes to birds of prey, like ospreys. Peering through their binoculars, the students were transfixed as they watched a pair of ospreys hunt in the lake around them — one of them caught a fish.

For their next stop, the boat’s captain took the Miss Sally to the city of LaGrange’s municipal water intake, not far from Highland Marina Resort. There, Bradfield explained that the water in taps from LaGrange to Hogansville come from this point.

During the third part of their cruise, the students learned about water quality and ecology, complete with charts about pH levels and photographs of the types of wildlife that live on and in the lake.

Splitting the students into two groups, the aft section of the boat was transformed into a laboratory, where Bradfield helped students take water quality samples and perform hands-on experiments. Forward on the boat, Breyfogle flashed pictures of wildlife, quizzing students on the names of the species. She helped the students take water samples and put them under microscopes for a better look at the tiny critters to which West Point Lake is home.

When it was time to head back to the marina, the youngsters didn’t seem to want the program to be over, preferring to stay on the lake, peering through their binoculars at the shoreline in hopes of spotting a fox or bald eagle.

Henry Jacobs, the middle Chattahoochee outreach coordinator for the riverkeeper, credits that enthusiasm to the support of the community and organizations across Troup County.

“The program has surpassed all of our expectations,” he said. “It’s been a great success in our eyes, and we’re proud of it. I think the fact alone that we expected 800 participants in the first year, and we’ve had triple that number says a lot about the community and the schools, partners and organizations that supported us.”

The Callaway Foundation donated an initial $50,000 toward the purchase of the boat, he said, and is continuing financial support to make programs available to Troup County school students free of charge. He hopes to continue the program long into the future, and said he feels like it’s part of a growing movement to bring West Point Lake back to a healthy state.

“We want to continue for many, many years, but it’s reliant on support of the community, especially to provide scholarship seats,” he said. “I would like to think this program is part of a revival of West Point Lake and what it means to the community.”

To register for a program or for information on the West Point Lake floating classroom, contact Laura Breyfogle at lbreyfogle@chattahoochee.org or 706-882-3701. Programs are available for business, church and civic groups, as well as students.

Hannah Bradfield, an educator for the Chattahoochee Riverkeeper, hands out binoculars aboard the floating classroom Miss Sally on Thursday.

http://lagrangenews.com/wp-content/uploads/sites/37/2016/08/web1_Riverkeeper02WEB-1.jpgHannah Bradfield, an educator for the Chattahoochee Riverkeeper, hands out binoculars aboard the floating classroom Miss Sally on Thursday.

Jim West, left, captain of the floating classroom Miss Sally, speaks with Laura Breyfogle, an educator for the Chattahoochee Riverkeeper on West Point Lake on Thursday during a tour for the Hogansville Boys and Girls Club.

http://lagrangenews.com/wp-content/uploads/sites/37/2016/08/web1_Riverkeeper03WEB-1.jpgJim West, left, captain of the floating classroom Miss Sally, speaks with Laura Breyfogle, an educator for the Chattahoochee Riverkeeper on West Point Lake on Thursday during a tour for the Hogansville Boys and Girls Club.

Quinyawnia Heard, 10, of Hogansville, looks at an osprey through a pair of binoculars aboard the Chattahoochee Riverkeeper’s floating classroom Miss Sally on West Point Lake on Thursday. The boat crew marked one year of programs last week.

http://lagrangenews.com/wp-content/uploads/sites/37/2016/08/web1_Riverkeeper01WEB-1.jpgQuinyawnia Heard, 10, of Hogansville, looks at an osprey through a pair of binoculars aboard the Chattahoochee Riverkeeper’s floating classroom Miss Sally on West Point Lake on Thursday. The boat crew marked one year of programs last week.

LaGRANGE — Law enforcement officers are receiving some positive face time on billboards around the state of Georgia — including... read more