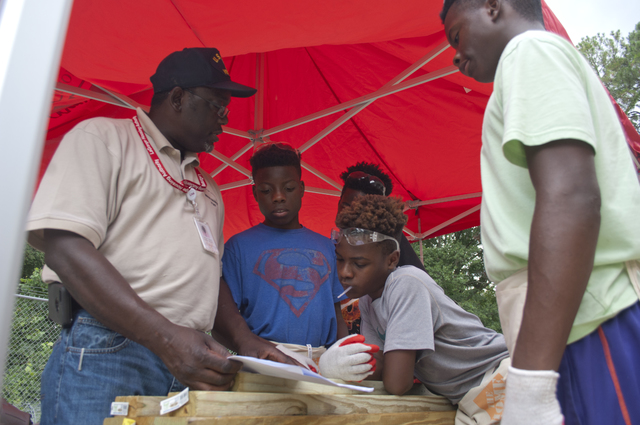 LaGRANGE — A group of teens who live in the Benjamin Harvey Hill Homes on Whitesville Street got more than jobs this week after they approached the housing authority and asked for work.

When the teens went to Zsa Zsa Heard, the LaGrange Housing Authority’s executive director, she figured the young men were looking for what most teens want: pocket money. Slightly skeptical but open to the idea, she arranged for the teens to meet her at her office Wednesday at 11 a.m. to talk about the possibility of work. They arrived 45 minutes early, she said.

“I expected them to come in and say they wanted money, but one of them said they wanted to stay out of trouble and they didn’t want to be in a gang,” Heard told the Daily News at her office Monday.

“The others kind of looked away, and he told them to tell me the truth,” she said. “I said, ‘Wait, you’ve been approached by gang members?’”

Heard explained the young men said they’re approached “all the time.” That’s when Heard knew she had to find something productive for the kids to do. She paired the ambitious teens with Earnest Pickett, the housing authority’s facilities manager, and set them to work.

Heard also took to her keyboard and shared the story on social media. The feel-good story spread like wildfire and caught the attention of not only Atlanta television stations, but national outlets like “Inside Edition” and the news website Huffington Post.

“It’s surreal, for real,” Heard said in her office as she prepared for a web-video interview with a national media outlet. “I didn’t even think much of it. What we’re trying to do when we post (on social media) is to let people know how the housing authority is changing. … We’ve got to change the face of public housing, and the old model is not working. I’m one of those that believes in critical thinking, and I think outside the box.”

As Heard sat nervously in her office waiting for her video conference, four of the teens were hard at work about a football field away at the housing authority’s maintenance building. They were building picnic tables Monday with the facilities manager, Pickett.

Under a red canopy tent, the former Navy electrician showed the teens the different types of tools they’d need to use when building the tables.

The young men listened intently as Pickett laid out the steps they’d have to take and gave them instructions about measuring two-by-fours using the right safety gear. Speaking to the Daily News, Pickett said he’s happy to have the help, and even happier about making a difference.

Pickett has overseen the teen group, having them do everything from delivering flyers to maintaining the community garden and its chicken coup.

“Basically, we’ll do this and I’ll work with them until they go back to school,” he said. “Then they’ll go to … the after-school program with West Georgia Star, our nonprofit.”

It was hot outside Monday, and humidity hung in the air, but the boys didn’t seem to mind it. Deion Woodard, 14, took a break from working on the picnic tables to talk to the Daily News. He’s a young man of few words, but when asked why he wanted a job instead of being “in the streets,” as he described it, he said, “people shouldn’t be doing bad stuff like this … like breaking into stuff, and stuff like that. They don’t come up to me and just ask if I want to be in a gang, they just like … say stuff about gangs.”

Anyone who’s ever been a teenager knows the powers of peer pressure, but Jalen Parham, 13, a rising eighth grader at Long Cane Middle School and one of the housing authority teens, has a simple answer when he’s asked to join a gang.

With their new-found work, the four boys, which also include Demond Woodard, 14, and Dylik Smith, 13, all have similar goals. They all want new shoes and clothes. One of them wants to buy an iPhone 5S.

Deion Smith, 14, left, pencils a cutting line onto a board as Dylik Smith, 13, Jalen Parham, 13, and Demond Woodard, 14, look on Monday at the LaGrange Housing Authority’s maintenance shop.

http://lagrangenews.com/wp-content/uploads/sites/37/2016/08/web1_HousingAuthority03WEB.jpgDeion Smith, 14, left, pencils a cutting line onto a board as Dylik Smith, 13, Jalen Parham, 13, and Demond Woodard, 14, look on Monday at the LaGrange Housing Authority’s maintenance shop.