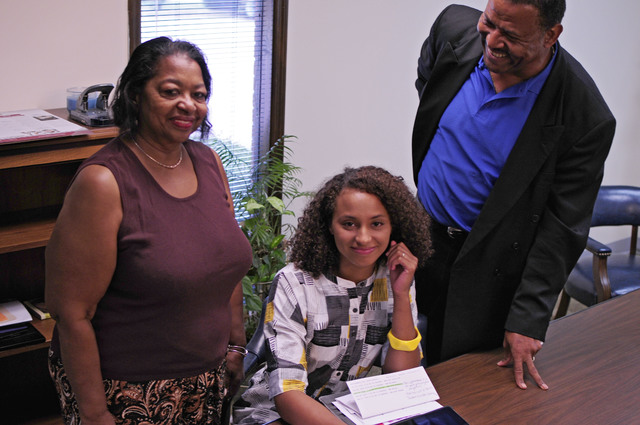 LaGRANGE — 18-year-old Alexis Davis has high goals, and she doesn’t intend to settle for anything less.

The recent Troup High School graduate has already been accepted to Tuskegee University, where she plans to begin her studies in aerospace engineering. However, she wants to go to the United States Military Academy in West Point, New York.

“I’m going to West Point next year,” she said confidently. She’s already started the yearlong process of getting in, which includes congressional recommendations.

The teen, who works 20 to 35 hours per week at two jobs, earned several scholarships to help her along the way. But her initial SAT score fell just short of securing a full ride.

Through an education talent search program at her school, she was connected with the Greater Achievement Youth Empowerment Academy Inc. group’s new program coordinating SAT tutoring. She participated in the four weekly sessions each Saturday morning, which were led by LaGrange College students, most of whom have secured perfect or near-perfect SAT scores.

Through the sessions, she learned tips for how to better answer questions and help her focus. She admitted reading was her shortcoming and didn’t finish the section her first time taking the test, but through the tutoring learned how to better focus her concentration.

She also practiced outside of the tutoring. She made flash cards to quiz herself in addition to the Saturday morning study sessions.

After every Saturday session, she would head straight to her job at Publix.

She also works on an as-needed basis for Noll Corp., a cleanup company.

After the four-week SAT course, she retook the test and raised her score 90 points. With the higher score, she has a better chance of securing more scholarships in the next year.

“I think it’s a blessing that I was able to meet these people,” she said, referring to the Greater Achievement group. “They’ve been really nice and helped me out a lot.”

Williemae Callaway, CEO of the group, said part of the problem with lagging SAT scores is disinterest among youth wanting to seek a higher education degree. A lack of support and self-determination contribute to the apathy.

Callaway noted Davis has a good support system in place with her family, something a lot of disenfranchised youth lack. However, she noted Davis’ self-determination also makes the biggest difference in her performance. She hopes the teen will become a role model for others, especially African-American youth, to focus on higher achievement.

“It was a pleasure to have Alexis with us and her leadership,” Callaway said. “To have her with us is such a blessing. … When we have fall sessions, we hope to have her back to talk to the students.”

Anyone seeking more information on the program may call the Greater Achievement office at 706-884-1854.

http://lagrangenews.com/wp-content/uploads/sites/37/2016/08/web1_web0801AlexisDavis.jpgTroup High School graduate Alexis Davis looks at paperwork with members of the Greater Achievement Youth Empowerment Academy Inc. Davis participated in a tutoring program provided by the group and raised her SAT score by 90 points. She is flanked by Williemae Callaway, CEO of Greater Achievement, and Andrew L. Moody Sr., a Greater Achievement co-founder.