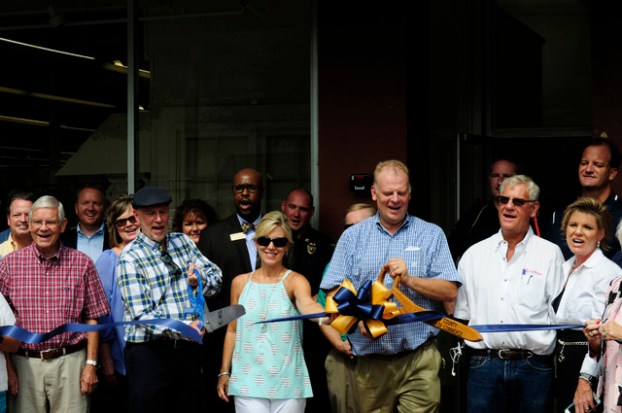 WEST POINT — Point University is expanding its presence in downtown West Point, and on Monday a ribbon cutting marked the opening of new student dorms in downtown loft apartments.

801 Lofts on 3rd Ave. can house up to 38 students. Steve Trammell, who owns the building, started the project after converting one of the office areas next to his business, Sewingmachine.com, into loft apartments. Four Point University students moved in and Trammell decided to make a space catered just to the university students.

“I got done with those (other lofts) and they were starting to look real promising, and I had this building, trying to figure out what to do with it,” Trammell said after Monday’s ribbon cutting. “… It was laid out in offices all around the perimeter of the building, so we just tore the fronts off all the offices, shifted some walls, put in some bathrooms and closets, put in a common area down the middle and put in dorm rooms for them.”

The university is leasing the dorm rooms from Trammell. Each room has two beds. There is a shared kitchen and the common room features couches along three walls with a flat-screen TV on the fourth wall.

Point University President Dean Collins called the creation of the loft dorms a “baby step, but it’s a good step.”

“For these 38 students (who can live in the loft dorms), it’s going to be convenient to them to walk down to the cafeteria and around the corner to class,” he said. “It’s very convenient, and I think it’s a part of the next step in the vitality of West Point.”

The university is in the early stage of creating a dorm building between 1st and 3rd avenues bordered by West 9th Street. It is planned to house more than 450 students, Collins said. The project is more than a year out.

“It’s going to take some time,” Collins said. “But Steve stepped up and started this project, and we’ve leased the space from him because we need it. It’s actually the first wave of students in downtown West Point, and it will be followed by the bigger project on the (old West Point) Foundry corner, and that’s going to take a year or more to see that to completion.”

Trammell said Monday he was glad to see the turnout of people who came for the ribbon cutting of the dorms.

“We’re really excited to be promoting what’s happening in downtown West Point,” he said as he pointed to a building being renovated across the street and an empty space where a new business is planned. “… We’ve got a lot going on downtown, and just constantly trying to renovate downtown. And with the student housing coming … over there, it’s going to change the whole dynamic of downtown.”

Trammell is mayor pro tem of West Point, but undertook the project as a private business owner. No public funds were involved.

A panoramic view of the inside of one of the dorm apartments in the 801 Lofts on 3rd Avenue in West Point. Each room has two beds, a closet and bathroom. The building has a shared kitchen and common room.

http://lagrangenews.com/wp-content/uploads/sites/37/2016/08/web1_web0802WPlofts4-1.jpgA panoramic view of the inside of one of the dorm apartments in the 801 Lofts on 3rd Avenue in West Point. Each room has two beds, a closet and bathroom. The building has a shared kitchen and common room.

http://lagrangenews.com/wp-content/uploads/sites/37/2016/08/web1_web0802WPlofts1-1.jpgPoint University President Dean Collins, holding scissors at left, and Steve Trammell, holding scissors at right, cut the ribbon for the new 801 Lofts on 3rd Avenue on Monday. Point University is leasing the lofts, owned by Trammell, as dorms to hold up to 38 students in downtown West Point.

LaGRANGE — It’s been more than a year since the Chattahoochee Riverkeeper launched its floating classroom, the Miss Sally, on... read more