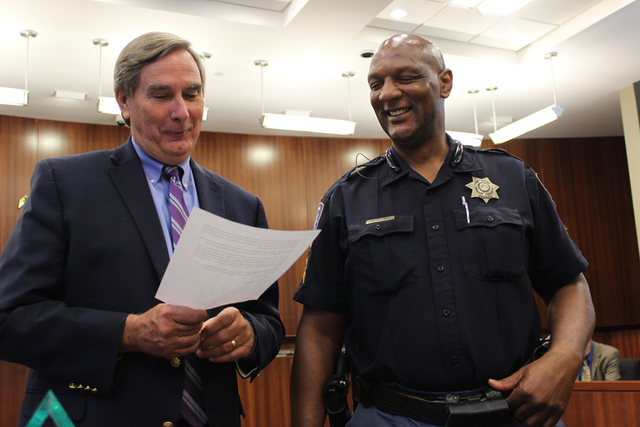 LaGRANGE — Troup County commissioners on Tuesday named their employee of the year during their meeting at the government center on Ridley Avenue.

Sgt. Ricky Ward of the Troup County Marshal’s office was recognized by Commission Chairman Patrick Crews in a short ceremony at the beginning of the meeting.

“He is not only action oriented but also hardworking, honest, dependable, upbeat and confident,” Crews said. “Sgt. Ward uses various methods to get the job done. He is creative and thinks ‘out of the box at times.’”

Ward, a 25-year employee of the county, was previously selected as the February 2015 employee of the month. His supervisors described him as displaying the characteristics of “an ideal employee.”

“Sgt. Ward’s personality and persistence has made all the difference in his successes past and future with the Marshal’s Office and Troup County,” Crews said.

Recognition of employees by county officials is based on work attendance, maintaining good working relationships with co-workers, other county departments and citizens, and for cooperativeness and commitment.

County Commission Chairman Patrick Crews, left, reads a congratulatory speech as he stands next to county employee of the year Sgt. Ricky Ward of the Marshal’s office.

http://lagrangenews.com/wp-content/uploads/sites/37/2016/08/web1_EmployeeofYear.jpgCounty Commission Chairman Patrick Crews, left, reads a congratulatory speech as he stands next to county employee of the year Sgt. Ricky Ward of the Marshal’s office.