Offensive line should be strong suit 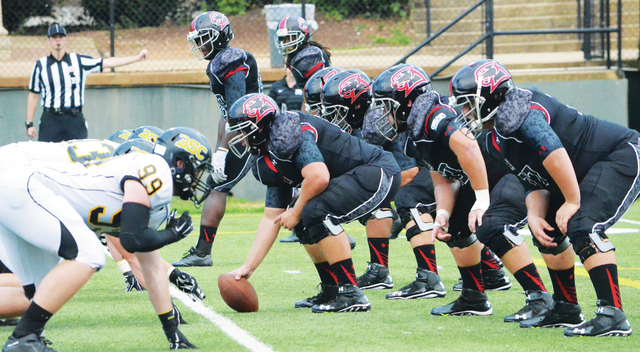 LAGRANGE – Last year this time, the offensive line was filled with unknowns for the LaGrange College football team.

The 2014 team boasted a veteran offensive line that featured five seniors, and that group was a strength of the team.

When the Panthers opened the 2015 season, conversely, the offensive line was composed of players relatively new to the college game, and there were some growing pains along the way.

As a new season approaches, the offensive line appears to be a question mark no longer.

“These guys all came in last year and played for us when they were sophomores,” LaGrange College head coach Matt Mumme said during the USA South media day on Monday. “We did have one senior on last year’s offensive line group. They’ve worked together and they’ve done it. So now they see where they need to take their game to this year for us to be successful, so we’re really excited about having them back.”

PROVIDING AN INSPIRATION: When Mumme was discussing the upcoming season, he grew emotional when talking about one of the team’s number one fans.

Gracie Atkinson, a 9-year-old LaGrange resident, has had a difficult year from a health standpoint, and Mumme said she has been an inspiration for his team.

“About seven months ago, she was diagnosed with a very rare form of liver cancer,” Mumme said of Gracie. “So she has been fighting this. Gracie is a ray of sunshine. She has the most infectious smile you have ever seen. She is just an inspirational little girl.”

Mumme said he’s amazed at “how strong she is at such a young age.”

When LaGrange College opens its season on Sept. 3 at Birmingham Southern, Mumme said Gracie will be on everyone’s minds.

“For the 2016 season, we have dedicated this season to little Gracie Atkinson,” Mumme said.

BIG CATCH: During his time at the podium, Mumme took a moment to talk about an offseason accomplishment, and it had nothing to do with football.

“I’ve got to brag a little bit,” Mumme said. “As coaches, we work really hard recruiting. We work really hard in football season. Sometimes, you’ve got to have something you do that gets you away from it. And for a lot of guys in this profession, it’s chasing a little white ball around a pasture and trying to knock it into a hole. For me, it’s chasing a big, green fish. This year, I actually went down to Lake Toho in Kissimmee, and I caught an 11.5-pound bass, which is kind of like a hole-in-one in golf. I was really excited about that.”

SPECIAL EXPERIENCE: In March, Mumme and the other members of the LaGrange College coaching staff went to the country of Panama to hold a coaching clinic for local high-school players.

During the camp, which was held in Panama City, the campers were put through five two-hour sessions.

“We got to spend some time coaching and clinicing the young men down there that want to play football, so that was a great opportunity, especially to go to Central America,” Mumme said. “According to those guys down there, we were really the first college to go down there and to coach their kids.”