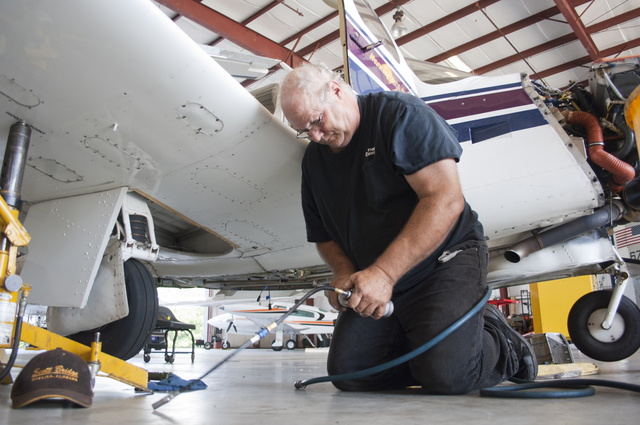 LaGRANGE — The LaGrange-Callaway Airport is slated to see its first major expansion in 15 years after county commissioners on Tuesday approved funding to build a new jet hangar.

The 8,000 square foot hangar will house a private jet owned by a regional alcohol distributor and cost approximately $750,000 to construct, according to Chad Traylor, the airport’s manager.

The hangar is expected to be open by spring 2017 and will be owned by the county. The jet’s owners will lease the hangar for $3,000 monthly — about $36,000 in annual revenue for the county. About $12,000 in yearly fuel sales are also expected from the jet.

Additionally, the company will pay local ad valorem tax on the jet to the tune of $118,000 per year, according to Tod Tentler, county manager. About $44,000 of the annual tax revenues will go to the county, and the balance will be sent to the Board of Education.

Owning the hanger will give the county a certain level of flexibility, Traylor said.

“Once we build it, it’s owned by the county, and if the tenant ever leaves, we can rent it to someone else,” Traylor said.

Traylor added that attracting corporate jets to the county’s airport is key to its growth and ability to continue to operate above cost.

“Once you start getting known as a corporate airport, it helps,” he said. “We’re in contact with other corporations, too, and if we can make them happy, then word gets around.”

Funding for the hangar’s construction is being pulled from the county’s general fund budget and loaned into the county’s enterprise-airport fund. No interest will be paid on the loan. The money will be primarily repaid to the general fund using rent collected, according to Dexter Wells, the county’s division director of public services.

Georgia Department of Transportation funds will also contribute to repayment, when available. The loan repayment sum will be paid annually in June.

Wells also said the hangar’s cost will be repaid partially by federal government airport improvement grants the county will begin receiving after a planned expansion of the airport’s main runway.

The federal grant money, known as the Federal Aviation Administration’s Airport Capital Improvement Program, will give the airport $150,000 each year after the runway expansion, which is expected to begin in April 2017 and finish by December 2017. That grant money can be used to pay off the cost of the hangar, as long as no safety improvements are needed at the airport.

LaGrange-based Southside Aviation, which services planes, is already a tenant at the airport and rents a slightly larger hangar of about 10,000 square feet. James Mackey, a Southside Aviation mechanic, said he’s been “very satisfied” with the hangar Southside has rented from the county.

“We haven’t had any problems,” he said as he worked on a propeller plane in the hangar Tuesday. “And we stay pretty busy. We don’t hardly have an empty building.”

Construction on the new hangar is expected to begin within the next few weeks.

James Mackey, an aircraft mechanic, works on a Mooney M20J propeller plane Tuesday at in a hanger at the LaGrange-Callaway Airport. The airport is planning an expansion and aims to add a new hanger, which could open by spring 2017.

http://lagrangenews.com/wp-content/uploads/sites/37/2016/08/web1_AirportHanger01WEB.jpgJames Mackey, an aircraft mechanic, works on a Mooney M20J propeller plane Tuesday at in a hanger at the LaGrange-Callaway Airport. The airport is planning an expansion and aims to add a new hanger, which could open by spring 2017.