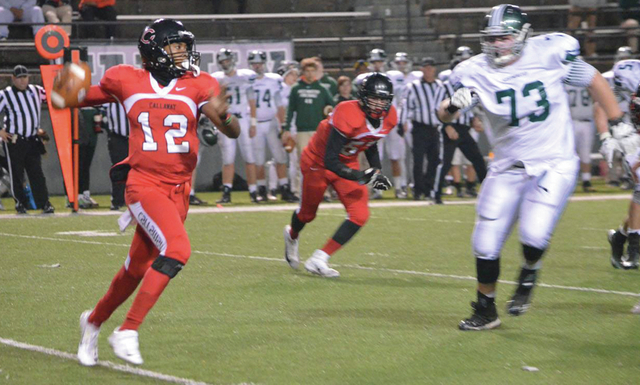 HOGANSVILLE – There are two wide receivers on an all-state team that was released on Tuesday, and Callaway High’s Braylon Sanders is one of them.

The all-state team was put together by the Georgia High School Football Daily, an online newsletter.

Each day this week, the newsletter is releasing one of its all-state teams, and on Tuesday, the top Class AA players were revealed.

Among those players is Sanders, a senior for the Cavaliers.

Sanders was selected as an all-state wide receiver, although he has seen considerable playing time at quarterback as well.

Sanders didn’t play football as a freshman, but he had a breakout sophomore season and was a big-play receiver while catching passes from current Georgia Bulldog Terry Godwin.

Sanders moved to quarterback for his junior season, although he was shifted back to wide receiver when he returned from an injury late in the season.

Sanders, who has been slowed the past few weeks with an ankle injury, worked at quarterback and wide receiver during summer workouts.

One noteworthy player was left off the all-state team.

The Class AAA all-state team will be announced on Wednesday, followed by the all-state teams in the remainder of the classifications.