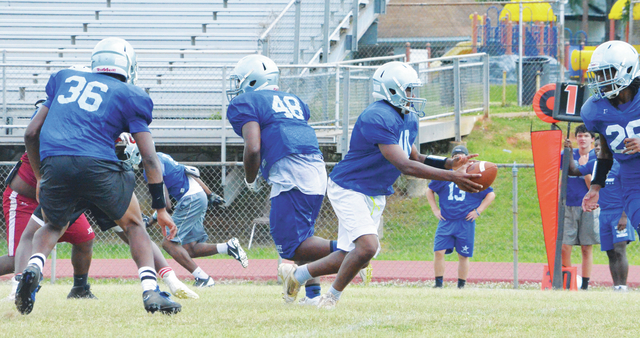 The LaGrange Grangers are more than two weeks away from their season opener against Callaway, but they will be on the field this week for a preseason game.

LaGrange, coming off a 5-5 season where it missed the state playoffs, will host Heard County on Friday at 7:30 p.m.

It’ll be the first of two preseason games for the Grangers, who will visit the rival Newnan Cougars next Thursday for their second one.

Friday’s game will be a test for the Grangers, especially on the defensive side of the ball where they’ll be chasing down Heard County quarterback Emory Jones, who last week committed to Ohio State.

It’s a preseason game, and while it doesn’t count toward either team’s win-loss record, the players are taking it seriously.

Since the Grangers didn’t have a spring practice this year, they’re eligible to play two preseason games, and they’re taking advantage of that.

Burks wanted to put Heard County on the schedule because he knew it would be a stern test for his players.

“They’re talented. They have nationally-ranked players,” Burks said. “It’s just good to see their mindset. How will they focus? How will they take it? We get to see that early.”

LaGrange is in the midst of its second week of preseason practice.

The Grangers wrapped up their first week of practice by holding an overnight camp at the Georgia Sheriffs Camp Pioneer last weekend.

This week, the Grangers have been practicing in the afternoon, and like the rest of the teams in the state, they were able to start holding full-contact practices on Monday.

While the Grangers continue to go at it hard, Burks wants to be sure the players will be able to give it their best during Friday’s game.

“We want them to be fresh Friday night so they can really do their best,” Burks said. “We don’t want to kill them. We know what a lot of them can bring. We want to see them do it.”

Burks added that “we’re evaluating a lot of positions, and a lot of guys.”

The Grangers are looking for a bounce-back season.

The Grangers did some good things last season, but they ended up missing the playoffs after losing their regular-season finale to Northside before falling to Columbus in a mini-playoff.

Burks said he and the other coaches are doing what they can to get the team ready to go, but he knows how much success the team achieves will ultimately be up to the players.

“We haven’t had the success we’ve wanted, so we’re always on edge, making sure every detail is right,” Burks said. “At some point, we’ve got to let go, and let them do it. That’s what we’re more anxious to see. Will they do that? It will come a point, and we hope it’s early, that they come together and do what they’re supposed to do.”

The LaGrange Grangers run a play during a scrimmage this summer. A number of offensive players will get some playing time during Friday’s preseason game against Heard County. Kevin Eckleberry | Daily News

http://lagrangenews.com/wp-content/uploads/sites/37/2016/08/web1_lagrange2.jpgThe LaGrange Grangers run a play during a scrimmage this summer. A number of offensive players will get some playing time during Friday’s preseason game against Heard County. Kevin Eckleberry | Daily News