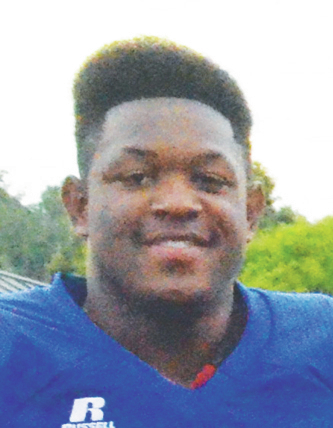 LAGRANGE – He knows what LaGrange High defense is traditionally all about.

Growing up, Jadarius Young watched LaGrange High’s football team dominate opponents, and a suffocating, lock-down defense was a big part of that.

“I had a couple of family members that played on this team,” Young said. “We’re getting an idea of what Granger football is all about, and playing that way.”

Young, a 5-foot-10 senior linebacker, is hoping to help the Grangers regain that defensive swagger this season.

“This year, we’re training hard, and our mindset is to play Granger football, to play LaGrange-style defense,” Young said on Monday during the team’s picture day at Callaway Stadium. “Go three-and-out, sit on the sideline and drink Gatorade and get the offense on the field, give them a chance to score.”

Young will be a big part of what the Grangers do on defense.

Young is a hard-hitting, agressive player, and he’ll be an anchor on the defense from the all-important middle linebacker position.

Young was an impact player as a junior, and he has excelled this summer in a handful of full-contact, 11-on-11 camps the Grangers have participated in.

Young also showed how serious he took the offseason strength and conditioning program when he finished third in the team’s preseason ironman competition.

Young knows this is it, his final opportunity to wear the LaGrange High uniform, and he has made sure he is prepared as possible for his senior season.

Young said the same goes for most of the players on the team.

“We pushed ourselves harder,” Young said. “We take that on ourselves to get in shape, and do those things that need to be done.”

With an outgoing personality, combined with his excellent play on the field, Young has developed into a team leader, and that’s a role he embraces.

“I’m a vocal and physical leader,” Young said. “Sometimes being vocal isn’t effective, so I have to be that physical guy.”

While the defense has some veterans, there are also a number of players who’ll be getting their first major taste of varsity action, and Young has made sure to be there for them.

“Mostly, they listen. They’re retaining it,” Young said of the younger players. “We’ve got a lot of young guys stepping up and playing hard. I believe that we’re going to have a pretty good season this year.”

LaGrange will play the first of its two preseason games on Friday at home against Heard County, and it will be on the road next Thursday for another preseason game against Newnan.

Then on Aug. 19, it’ll be time to get the regular season started, and LaGrange will open against Callaway.

LaGrange High linebacker Jadarius Young makes a tackle during a scrimmage earlier this summer. Young, a senior, will be a key member of the LaGrange defense this season. Kevin Eckleberry | Daily News

http://lagrangenews.com/wp-content/uploads/sites/37/2016/08/web1_LHS-young2.jpgLaGrange High linebacker Jadarius Young makes a tackle during a scrimmage earlier this summer. Young, a senior, will be a key member of the LaGrange defense this season. Kevin Eckleberry | Daily News