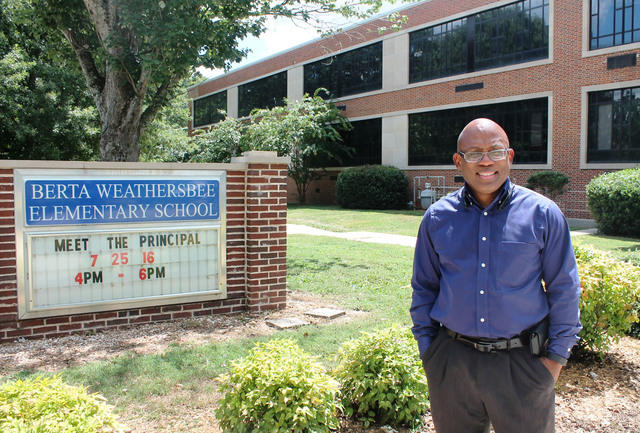 LaGRANGE — LaRoyce Sublett knew what he wanted to be when he graduated from high school in Longview, Texas – a spy with the United States government. He started off as a parole officer and entered the classroom as a substitute teacher on his days off.

After two years, his Inspector Gadget aspirations dissipated as he grew to like teaching more and more. It wasn’t long before he began pursuing a degree in special education and he hasn’t looked back.

Sublett’s first teaching assignment was a little over a mile from where he served as a parole officer. He found himself teaching the younger siblings or kids of some of his former parolees. He identified a common thread that he was determined to break.

“Most people I had on my caseload did not have a high school diploma. They only made it to the 10th or 11th grade and then dropped out,” said Sublett. “I learned that if I can make a difference in the earlier stages (before a child needs a parole officer), I can come in and be an effective teacher. It gives me a greater sense of purpose about what I was put on this earth to do.”

Later in his career, a former mentor saw leadership potential in Sublett and encouraged him to earn certifications in leadership. After he did, he eventually worked as an assistant principal and principal for both elementary and middle schools. He says the work prepared him to for the relationships he will form with both students and parents.

“I see myself building a relationship with the kids the same way I built a relationship with my own daughter. I have a firm belief that the model of how you build relationships is treating them as your own,” The native Texan said. “In education, we call it in loco parentis — in place of the parent. When they are in our care, our responsibility is not only to educate them, but to teach them values, mold them, teach them how to make good decisions and teach them the difference between right and wrong.”

Along the same lines, he looks forward to reaching out to parents before the first day of school. He has already hosted an event for the community to meet the principal and school employees will personally visit homes in the community.

Sublett often relates his background as a winning intramural basketball coach with leadership because, “You have to build a team of people that enjoy working together to build a common bond about what you are trying to do. That ties in with being a leader in a school system,” he said.

As a leader for the All Pro Dads organization, Sublett quickly recalls the moment he received a call from a Super Bowl winning coach.

“Tony Dungy came to speak at our monthly breakfast and his thoughts on leadership inspired the group,” Sublett said. “We had one of the biggest chapters in the state of Georgia so it was about 300 dads there. We were able to have the proceeds from the biscuit sales benefit the school and our students.

Dungy “is a good down-to-earth guy, and I enjoyed picking his brain about leadership,” he added. “We are Facebook friends and keep in touch via social media.”

When talking about the well-established history of the school, the former high school track and cross country star knows he has big shoes to fill.

“Historically, there have been many great leaders and students that have come through Berta Weathersbee, and I look forward to continuing that tradition while raising student and teacher expectations,” he said.

On the first day of school, he looks forward to helping students out of the car as they come through the car rider line. He also expects to log steps on his Fitbit by walking several miles through the halls of the school.

“Sometimes I can walk five miles throughout the school day and not even realize it so I bought one of these Fitbits so I can see how far I walk,” he said. “Needless to say, throughout the year, I wear out a lot of shoes!”

LaRoyce Sublett stands outside Berta Weathersbee Elementary School, where he will serve as principal when school starts Wednesday.

http://lagrangenews.com/wp-content/uploads/sites/37/2016/08/web1_WEBSublett.jpgLaRoyce Sublett stands outside Berta Weathersbee Elementary School, where he will serve as principal when school starts Wednesday.