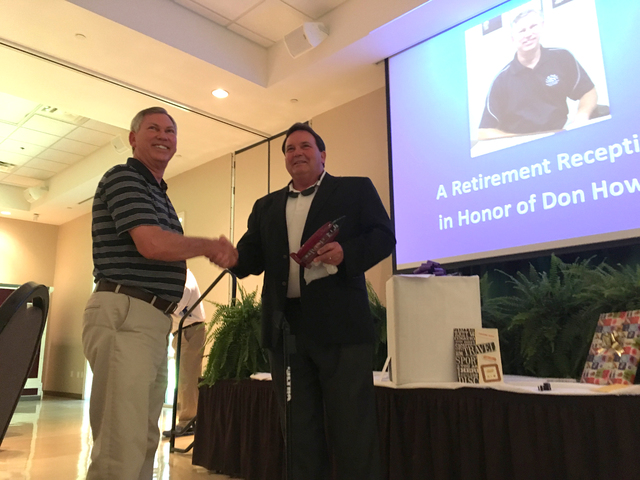 LaGRANGE — Troup County Parks and Recreation Director Don Howell is a lot like the referees and umpires he oversees: when he’s doing his job, you’ll never even know he’s there.

For 40 years, Howell has worked in the county’s recreation department, tending to everything from trash pickup to scheduling ball games. Eventually, he rose to become the manager of the whole office. Wednesday, he retired.

His colleagues reminisced about his career at a retirement party in the Active Life Center on Ragland Street, calling him a “great guy” and a “stand-up person.”

Since 1976, Howell has seen the recreation department grow as the county’s population has. At his retirement, he oversaw dozens of employees — both full and part time — and scores of ball fields, yet he was largely working in the background.

Whether he was going to bat before the County Commission to hire new employees, or serving as the treasurer of the Georgia Recreation and Parks Association, Howell was a tireless and relentless worker, his colleagues said.

County Commissioner Richard English said, “it’s been a long run, but it’s all been good.”

Person after person all spoke highly of Howell at the celebration, but of course, retirement doesn’t come without a few jokes about age.

“Getting old is when you build a mountain and don’t even realize you’re on top of it,” jokingly said Frank McRae, chairman of the county’s parks commission.

Howell has seen a mountain built of the parks department, whether or not he realized it was growing under his feet. During his time at the office, he’s seen the creation of the Mike Daniel center on Lafayette Parkway — a building that was once a blighted, abandoned hardware store — along with the renovations of Callaway Stadium and the construction of Shuford Fields. When he started his career, Howell said he had young children and sometimes didn’t get home until 10 p.m. He credited his wife for her dedication and patience during those early years.

In short, Howell’s had a long career — but he’s not showing signs of slowing down. As he told the crowd gathered at his retirement party, one of his first acts in retirement will be finding a job.