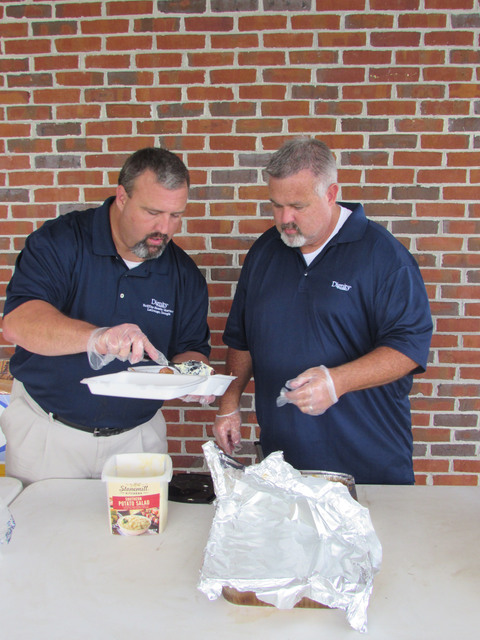 LaGRANGE — For two days, some of the staff at Striffler-Hamby Mortuary at 1010 Mooty Bridge Road switched professions and became expert chefs as they prepared a barbecue lunch for area first responders.

The meals were Striffler-Hamby’s way of saying “thank you” to local law enforcement officers and firefighters.

“In our line of work, we rely on these people for our funeral escorts and to keep us safe if we’re working in the building late at night,” explained Dwayne Fuller, manager of Striffler-Hamby. “We’ve been wanting to do something for them for a long time.”

The preparation for the luncheon began late Tuesday evening, as Fuller and his nephew placed 28 Boston butts on a smoker outside the funeral home. He joked the two probably got “30 minutes of sleep” as they took turns staying up, waiting for the meat to cook.

In the end, it seemed the pork was seasoned, sauced and cooked to perfection.

“If you ever want to get out of the funeral business, this would be the way to go. That barbecue was great,” Troup County Sheriff’s Deputy Shane Frailey told Fuller and his staff.

The funeral home served law enforcement officials and firefighters well into the evening.

“We set it up so they could pick up a plate and go, or come here and eat in our banquet room,” Fuller said. “We also made sure we could catch all the shifts — those who came in the morning and those who start later in the day.”

While the meal took center stage, Fuller said the event was also to show support for those in blue.

“The service they provide to the community … the unknown … putting their safety at risk for the community and for us. They do a lot,” he stated.

Striffler-Hamby hopes to make the luncheon an annual event.

From left, Dwayne Fuller, Steve Evans and Jamie Clary of Striffler-Hamby Mortuary at 1010 Mooty Bridge Road put together plates filled with barbecue and side items for their inaugural luncheon to honor local law enforcement officers.

Dwayne Fuller, left, and Steve Evans of Striffler-Hamby Mortuary prepare barbecue plates for local law enforcement officers. Fuller said the luncheon was the business’ way of saying ‘thank you’ to the first responders.

http://lagrangenews.com/wp-content/uploads/sites/37/2016/08/web1_SHLunch2-1.jpgDwayne Fuller, left, and Steve Evans of Striffler-Hamby Mortuary prepare barbecue plates for local law enforcement officers. Fuller said the luncheon was the business’ way of saying ‘thank you’ to the first responders.