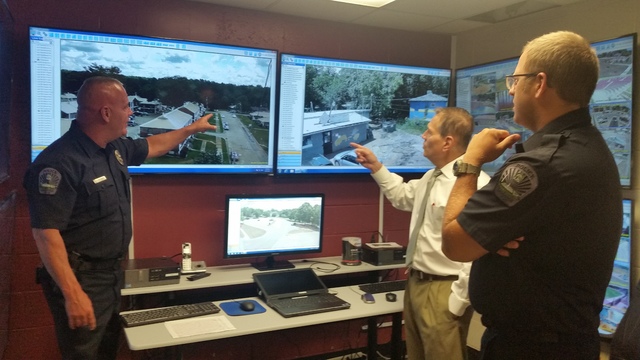 LaGRANGE — For almost 20 years the LaGrange Police Department has utilized public and private surveillance systems to keep an eye on the community and solve violent crimes.

“We use the cameras for the successful documentation of drug investigations, the sell of marijuana and cocaine and gambling,” stated Public Safety Chief Lou Dekmar. “They’ve also captured incidents of officers being assaulted, aggravated assaults and even a shooting. More importantly, the cameras help us determine where to place our finite resources. They also make our communities feel safer.”

More than 120 cameras blanket the city of LaGrange. While Dekmar declined to specifically identify where the equipment is placed, he said they are in areas with a high volume of traffic and safety concerns. Some of the department’s cameras sit on top of portable platforms and can be physically moved from location to location.

The department has also partnered with several local businesses and public housing venues to access their surveillance systems if need be.

Those areas with cameras are monitored inside a special room within the police department. From there, investigators can control the cameras, moving them from side to side or zooming in on a particular hot spot.

“When we are doing special patrols or details … or have knowledge of an event, we can use those cameras and have extra eyes to make sure there is no crime afoot,” Dekmar explained. “… Such as when there is an event at the Sweetland Amphitheatre. We can help with traffic control, allow people to enjoy the event and not worry about any criminal activity.”

The cameras run in real time and all the activity is recorded and saved to a drive in case investigators need to go back and review a crime scene, stated Dekmar. The recordings are also useful during accident investigations, he added.

All the video that is captured is maintained by city of LaGrange employees, said Dekmar.

The camera system played an intricate part on April 2 when LaGrange Police Officer Brady Pike was punched by a man allegedly creating a disturbance on a playground in the Lucy Morgan Homes on Borton Street. A camera near the scene captured the incident, which showed the suspect, identified as David Noles, punching Pike in the face as the officer approached him.

While there was some initial backlash from the community during the inception of the camera surveillance system in November 1997, Dekmar said people now want more of them.

“We had a couple of objections … but when we explained we were going to use them to monitor public areas, that seemed to satisfy people’s concerns. One of the city council members at the time then wanted more of them,” Dekmar said. “I always have requests for more cameras than I can provide.”

That demand may be met within the next year. The cameras have proved so successful, Dekmar asked the LaGrange City Council in June for funds to buy more cameras and equipment. The council approved $200,000 for the request in the 2016-2017 budget.

Dekmar said the new cameras, which includes some that are portable, will be in place by spring at six major intersection.

LaGrange Police Gang Investigator Ray Ham shows Public Safety Chief Lou Dekmar and Investigator Jarrod Anderson an area of concern on one of the many monitors inside the department. The screens show different streets and neighborhoods around the city of LaGrange where LPD has placed cameras to watch the area for safety and track recent criminal activity.

http://lagrangenews.com/wp-content/uploads/sites/37/2016/08/web1_web0804Cameras01-1.jpgLaGrange Police Gang Investigator Ray Ham shows Public Safety Chief Lou Dekmar and Investigator Jarrod Anderson an area of concern on one of the many monitors inside the department. The screens show different streets and neighborhoods around the city of LaGrange where LPD has placed cameras to watch the area for safety and track recent criminal activity.