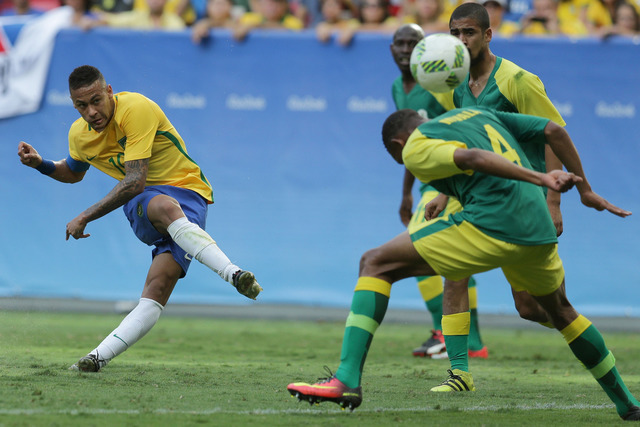 BRASILIA, Brazil — Brazil started its quest for an Olympic gold medal in men’s soccer with a disappointing 0-0 draw against South Africa, a result that prompted loud jeers by some of the home fans.

Despite an attack led by Barcelona striker Neymar and talented youngsters Gabriel Jesus and Gabigol, Brazil was not able to find the net at the packed Mane Garrincha Stadium in Brasilia.

Gabriel Jesus, newly signed by Manchester City, had the game’s best chance in the 69th minute but missed an open net with a close-range shot that struck the post.

“I have the obligation to score that goal,” he said. “I’m not used to missing those chances. I’m disappointed. I won’t be able to sleep tonight because of that one.”

“We had the best chances but the ball didn’t go in,” Brazil coach Rogerio Micale said. “And we also have to give credit to South Africa, which has a very determined team and made it difficult for us to impose our game.”

South Africa played a man down from the 59th after defender Mothobi Mvala earned a second yellow card for a hard foul on Brazil right back Zeca.

In the other Group A match in Brasilia, Iraq and Denmark also played to a scoreless draw, leaving all four teams tied.

In Rio de Janeiro, Portugal defeated two-time Olympic champion Argentina 2-0 with goals by Paciencia in the 66th and Pite in the 84th in front of 45,000 fans at the Olympic Stadium, the vast majority cheering for Portugal. Earlier, Honduras defeated Algeria 3-2 in the other Group D game in Rio.

In the jungle city of Manaus, Colombia and Sweden drew 2-2 in Group B. The Colombians got on the board with Teo Gutierrez in the 17th but allowed the Swedes to move ahead with goals by Mikael Ishak in the 43rd and Astrit Ajdarevic in the 62nd. Colombia’s equalizer came from a 75th-minute penalty kick converted by Dorlan Pabon.

Nigeria was playing Japan in Manaus only about six hours after arriving in the city. The team had its trip to Brazil delayed by a mix-up at an airport.

In Group C, defending champion Mexico drew 2-2 with Germany despite twice having the lead in the northeastern city of Salvador. Oribe Peralta scored Mexico’s first goal, and Germany’s 78th-minute equalizer came from 2014 World Cup champion Matthias Ginter. In the other group game, South Korea routed Fiji 8-0. In its eighth straight Olympics, South Korea scored seven of its goals after the 60th minute. Three goals came in a two-minute span.

The Olympic gold is the only major trophy Brazil hasn’t won in soccer. The country’s team has won the silver medal three times, including four years ago in London, when Neymar was in a squad that lost the final to Mexico.

Brazil controlled possession but wasn’t able to create many significant chances until late in the second half. South Africa, playing at the Olympics for the first time since 2000, also came close several times.

The Olympics is Brazil’s first tournament since the senior team was embarrassed at the Copa America after failing to advance past the group stage of the continental competition. Neymar skipped that tournament to be able to play at the Rio Games.

Brazil also finished second at the Olympic tournament in 1984 in Los Angeles and in 1988 in Seoul, the second time with a team that included Romario and Bebeto. The five-time World Cup champions won the bronze in 1996 in Atlanta with striker Ronaldo, and in 2008 in Beijing with playmaker Ronaldinho.

South Africa defeated Brazil 3-1 in the group stage of the Sydney Olympics in 2000. Brazil’s under-23 squad beat South Africa by the same score in an Olympic warmup earlier this year.

Brazil’s Gabriel Jesus, left, reacts at the end a group A match of the men’s Olympic football tournament between Brazil and South Africa at the National stadium, in Brasilia, Brazil, Thursday, Aug. 4, 2016. The game ended in a 0-0 draw. (AP Photo/Eraldo Peres)

Brazil’s Neymar reacts after missing a chance to score during a group A match of the men’s Olympic football tournament between Brazil and South Africa at the National stadium, in Brasilia, Brazil, Thursday, Aug. 4, 2016. (AP Photo/Eraldo Peres)

Brazil’s Neymar, left, strikes the ball during a group A match of the men’s Olympic football tournament between Brazil and South Africa at the National stadium, in Brasilia, Brazil, Thursday, Aug. 4, 2016. (AP Photo/Eraldo Peres)