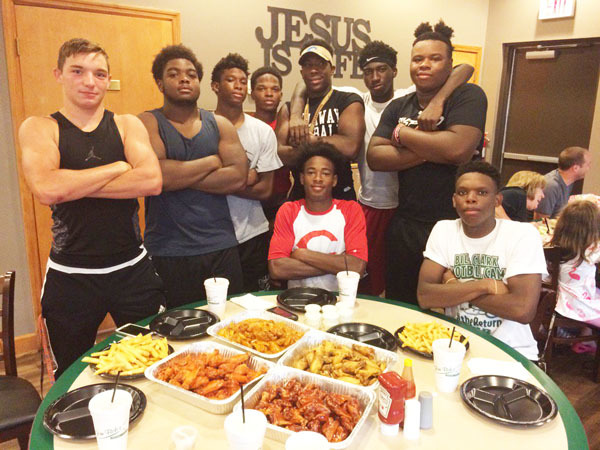 HOGANSVILLE – Callaway High’s Travis Traylor was the man to beat.

At the close of the summer strength and conditioning program, the Callaway Cavaliers held their annual ironman competition.

The players on the team competed in a number of events designed to test them in different areas, including speed, strength, flexibility, jumping ability, endurance, and so forth.

It’s a way for the players to show how much work they’ve put in during the offseason, and no one was more impressive during the competition than Traylor.

Traylor, a junior linebacker, finished with 210 points, which left him 12 points ahead of his next closest competitor, Tai Walker.

Traylor made it happen by delivering consistent performances in each of the events, including the one-mile run that he won with a time of a little more than five minutes.

For Traylor, it was the achievement of a goal he’s had for a few years.

“I’ve wanted to win it since I was a freshman,” Traylor said. “It was big for me to win, considering everybody else we had who’s a whole lot stronger than me. You’ve just got to keep working at it.”

Traylor will be a key part of the team this season.

Traylor, who started half of the games a year ago, will be playing at the outside linebacker position that was occupied by Dre Martin last season.

“I’m ready,” Traylor said. “Dre made a big impact on the team. I’m taking his spot, so I’ve got to keep carrying forward what he did at the outside linebacker position, just keep doing it.”

Callaway defensive coordinator Dusty Hubbard sees how hard Traylor works on his conditioning, so he wasn’t surprised to see him finish atop the ironman standings.

Traylor is also a backup quarterback for the Cavaliers, although he doesn’t figure to get much time at that position unless there are injuries.

As for this season, Traylor is committed to making the most out of his own talents, and he’s also trying to help some of the other players along.

“We’ve got a sophomore who’s probably going to start, so I’ve been trying to lead him, show him the ropes and everything,” Traylor said.