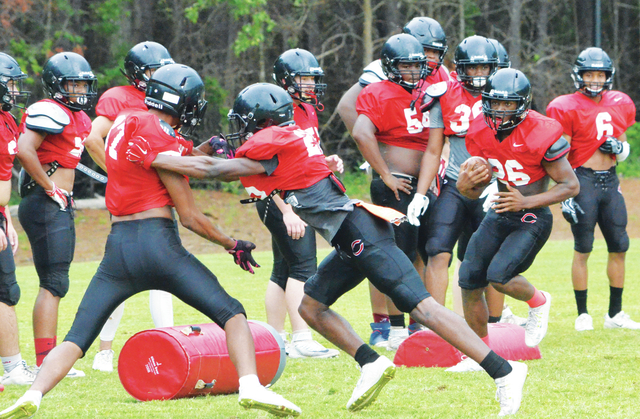 HOGANSVILLE – The seven-on-seven competitions during the summer are valuable, and the week of conditioning at the start of preseason football practice is important as well.

Football is a contact sport, though, so it’s always a welcome time for teams across the state when they can put the pads and start hitting.

For teams in this state, Monday marked the first day they could begin holding full-contact practices according to Georgia High School Association regulations.

One of the teams taking advantage of that is Callaway, which was on the field Monday afternoon for its first full-contact practice of the preseason.

It’s all a part of the process for the Cavaliers, who are preparing for what they hope will be another stellar season under head coach Pete Wiggins, who took over the program in 2005.

Last year, the Cavaliers won a region championship and made it to the second round of the state playoffs and finished with a 10-2 record.

“We had a good week,” Wiggins said. “It’s been hot. There’s been adversity we’ve had to deal with. But the kids have had a good attitude, and I feel like we’ve gotten better.”

As it has done for the past decade, Callaway will be in Hogansville for its preseason game.

Callaway will host Northside at Hendrix Field on Aug. 12, with kickoff set for 7 p.m.

When the Cavaliers report for practice this afternoon, that preseason game will be one week away.

“They’re getting ready to see a Friday night game,” Wiggins said after Thursday’s practice session. “So, tomorrow we’ll be a week away from our scrimmage against Northside. So, we’re looking forward to that down in Hogansville, and that’ll be a big day for the kids. You work hard all year long for Friday night. When you get there, it sure is special.”

Like all of the teams in the state, Callaway has had to deal with the heat.

It’s August in Georgia, so it’s going to be hot and humid, and teams prepare for that.

There’s no getting around the fact that players have to get out work in the heat, though, especially since a season begins right in the midst of the dog days of summer.

“You try to prepare the kids,” Wiggins said. “We’re out in it all summer. Their bodies have to condition, because it’s going to be hot on Friday nights. But we have to take care of them, and we do.”

Callaway defensive coordinator Dusty Hubbard said this week is a major transition for the players.

Last week the players weren’t in full pads as went through the acclimation portion of preseason practice.

This week, the practices are longer, and the players are having to adjust to having the full uniform on as well.

“The biggest thing is, you always have to adapt,” Hubbard said. “It slows them down a little bit. They’ve got to learn to fight through it. I feel like we’ve done a good job of that. There’s time we drag, but when you light a fire under them, they respond pretty good.”

Callaway will play its regular-season opener on Aug. 19 against LaGrange.

Last year, Callaway fell behind big early and LaGrange went on to win 45-20.

Callaway didn’t lose again until it fell to Westminster in the second round of the state playoffs.

The Callaway Cavaliers held their first full-contact pratice on Monday as they prepare for their season opener on Aug. 19 against LaGrange. Kevin Eckleberry | Daily News

http://lagrangenews.com/wp-content/uploads/sites/37/2016/08/web1_CHS-2.jpgThe Callaway Cavaliers held their first full-contact pratice on Monday as they prepare for their season opener on Aug. 19 against LaGrange. Kevin Eckleberry | Daily News