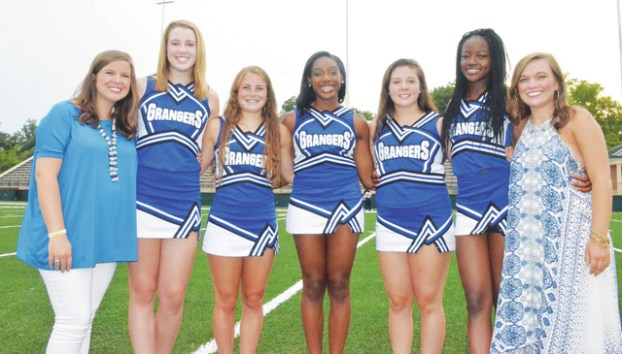 LAGRANGE – They made their presence known in a big way.

The LaGrange High cheerleaders participated in a National Cheerleaders Association camp at Auburn University a few weeks ago, and a handful of them got the opportunity to perform individual tryouts for a group of judges with the hope of becoming an all-American.

Eight LaGrange cheerleaders tried out, and five of them were selected as NCA all-Americans based on the superiority of their routines.

Among that group, LaGrange’s Kennedy Burks was picked as the top cheerleader out of all of the girls that tried out.

Out of more than 50 elite cheerleaders, Burks’ performance was second to none.

During the tryouts, the cheerleaders were on the mat by themselves, which is obviously a lot different from what they’re used to since it is a team sport.

“The tryouts were nerve-wracking,” Burks said. “I was so nervous. But we all did really well.”

As for her own routine, Burks didn’t feel it was flawless, but it was clearly exceptional enough to impress the judges, who gave her the top marks of any of the competitors.

“I actually did mess up in my tryout, but I just kept going, pretended like nothing happened,” Burks said. “I thought I was going to get docked for that one little mistake.”

The all-American cheerleaders now have the opportunity to participate in a New Year’s Day parade in London, England if they’re able to make the trip.

“I am super-excited,” Burks said. “I think we’re all trying to go London for that New Year’s parade.”

LaGrange coach Mary Beth Scott said the honor is a well-deserved one for Burks.

“We were not surprised one bit,” she said. “Kennedy is a great cheerleader, but I think she’s a great leader. She’s got the most positive attitude of any girl on the team. She can take criticism, and she can give criticism with such grace.”

Scott said becoming an all-American is a tremendous honor for all of the girls.

“It’s something they can hold onto forever,” she said.

The five all-Americans will be a part of a competitive cheerleading team that should do some great things during the 2016-2017 season.

LaGrange had a strong 2015-2016 season that included a sixth-place finish in the Class AAAAA state sectional, and an 11th-place showing in the state finals.

At the state sectional, LaGrange delivered the best score in the history of the program.

All but two of the members of last season’s team will be returning when a new season gets under way in November.

For the seniors, including Burks, it will be their final go-around as a high-school cheerleader.

They will also be on the sidelines for LaGrange’s football games this fall, and that’ll hold special meaning for Burks, since her father Dialleo Burks is the Grangers’ head coach.

“I just have to make memories while I’m here, and just do great things,” Kennedy Burks said. “I’m excited, and heart-broken at the same time.”

LaGrange’s Kennedy Burks was selected as the top cheerleader at a National Cheerleaders Association camp at Auburn University. Contributed photo

http://lagrangenews.com/wp-content/uploads/sites/37/2016/08/web1_cheerleading3.jpgLaGrange’s Kennedy Burks was selected as the top cheerleader at a National Cheerleaders Association camp at Auburn University. Contributed photo

HOGANSVILLE – There are two wide receivers on an all-state team that was released on Tuesday, and Callaway High’s Braylon... read more