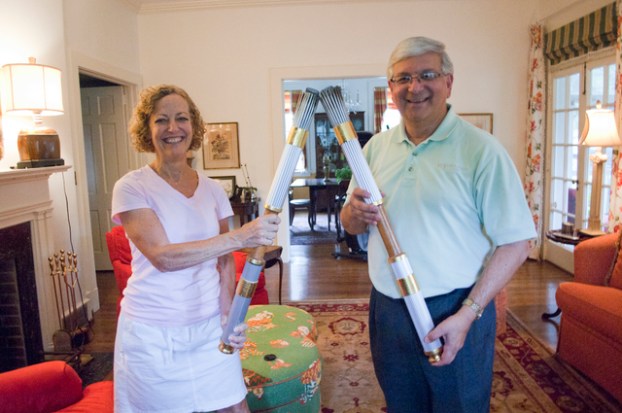 Locals look back on ‘96 Olympics

LaGRANGE — When the Olympic flame is lit in Rio de Janeiro tonight, it may be a bring back some familiar memories for area residents.

The flame has been on the road since April 21, traveling more than 23,000 miles by road and air. The relay began in Greece with a stop in Switzerland before heading to the host nation of Brazil, but 20 years ago, it passed through LaGrange.

Emily Joseph of Ridgecrest Drive was one of 23 people in LaGrange who carried the torch in the early morning hours of July 17, 1996, as the flame made its way to Atlanta for the opening ceremony.

“It was pretty overwhelming to know that you’re in charge of the actual flame, even just for a little while,” she said during an interview with the Daily News last week. “They assure you the other part of the flame is in the vehicle behind you. They tell you even if it goes out, there’s a backup, but you don’t want to be the one that makes them have to re-light it.”

“I always knew I lit his fire,” she said jokingly.

Chris Joseph, who was mayor from 1990 to 1993, also said the experience was overwhelming.

“Just to be even a small part of it was incredible,” he said. “This thing started in California and came across the entire country. It was very unique.”

But carrying the flame was hardly the only involvement Chris Joseph had with the Olympics in LaGrange.

“I had a couple of friends on the Olympic board, and I told them we wanted to do something to bring LaGrange on as part of this deal,” he said. “In a short time, they came up with this coach who did international training of track and field athletes. With the help of some friends in Atlanta, we developed the ‘I Train in LaGrange’ program, and we hired the coach and were able to bring athletes in from all around the world to train here.”

The “I Train in LaGrange” program brought Olympic athletes who were preparing for the 1996 games in Atlanta, including a delegation from South Africa that lived in LaGrange College dorms.

LaGrange even built a track where the athletes could train. It still stands today on Fort Drive behind Whitesville Road Elementary School. Training wasn’t the only event held in LaGrange. Olympic trials for race walking were held in southwest LaGrange, partially on the campus of LaGrange College.

Some subtle reminders of the trials are still here, in fact. Anyone who’s ever driven under the railroad bridge over Forrest Avenue just near the LaGrange College baseball field may notice graffiti reading “Go Herm Go!” and “Sub 4:00” — both shout outs to Olympic trial athletes, presumably one of whom was named Herm. “Sub 4:00” was a reference to the time athletes needed to beat to qualify, Emily Joseph explained.

The graffiti has faded almost to the point of being unrecognizable, but the memories of the games — and their LaGrange connection — are still fresh in the Josephs’ minds.

“You know, in LaGrange, we had a lot of competitions,” Chris Joseph said. “We had two countries play softball one Sunday afternoon. We had Brazil and another play basketball at (LaGrange College’s) Mariotti gym, and we had a track meet.”

The 2016 Rio Olympic Games will run from now until Aug. 21. Visit www.nbcolympics.com for scheduling information and where to tune in to watch your favorite sport.

Chris Joseph, a former Olympic torch bearer, looks at photographs taken of him and his wife as they carried their torches down New Franklin Road and Bob Williams Drive during the 1996 Olympic torch relay.

http://lagrangenews.com/wp-content/uploads/sites/37/2016/08/web1_Olympics02WEB-1.jpgChris Joseph, a former Olympic torch bearer, looks at photographs taken of him and his wife as they carried their torches down New Franklin Road and Bob Williams Drive during the 1996 Olympic torch relay.

Emily Joseph and her husband Chris Joseph pose at their home with their Atlanta Olympic Games torches, which they carried through LaGrange on July 17, 1996. Twenty-three people carried the torch through LaGrange from 6:18 a.m. to 7:47 a.m.

http://lagrangenews.com/wp-content/uploads/sites/37/2016/08/web1_Olympics01WEB-1.jpgEmily Joseph and her husband Chris Joseph pose at their home with their Atlanta Olympic Games torches, which they carried through LaGrange on July 17, 1996. Twenty-three people carried the torch through LaGrange from 6:18 a.m. to 7:47 a.m.

LaGRANGE — For two days, some of the staff at Striffler-Hamby Mortuary at 1010 Mooty Bridge Road switched professions and... read more