Remembering the Olympic flame in LaGrange 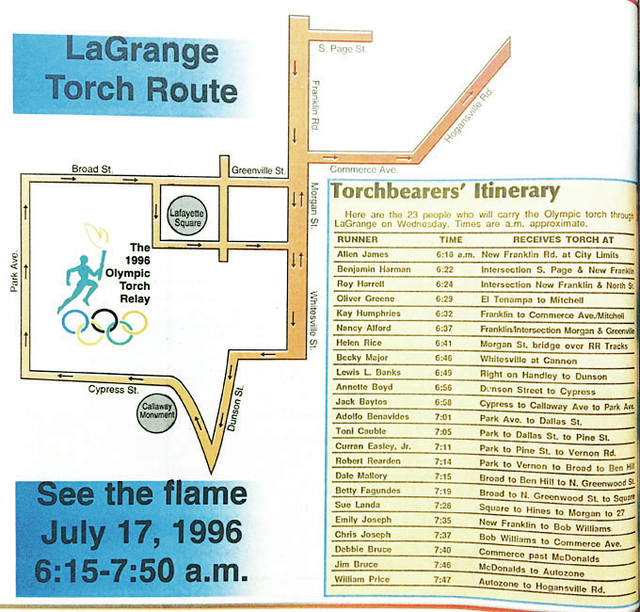 My mom, brother, some neighbor friends and I had all shuttled out there early in the morning in the hopes of catching a glimpse of the Olympic flame as it came through LaGrange. Admittedly, at 12 years old, it didn’t strike me how momentous an event it really was.

Don’t get me wrong, I thought it was “cool” that the Olympic flame — that symbol of something so universal and steeped in ancient tradition — was coming through my little town. But I probably would’ve been just as content watching it on TV — or not at all.

Maybe I would’ve just played some video games and had someone tell me about it later. I mean, I was 12. What do 12 year olds care about things like that?

Anyway, in my young mind, it seemed like forever before the runner actually came through. We got there early to make sure we would have a space to see, and it was immediately apparent why — it was already packed.

As time went on, it started to feel more and more sardine-like on the side of the street.

My brother, I and the young neighbor friends milled about and tried to occupy ourselves talking about all the things 12-year-old boys in the ’90s cared about: video games, movies, comic books and the like.

Then, after that eternity of standing, the crowd started to cheer. There was the runner, coming down the street with the flame. A man jogged up and touched his torch to the torch of the next man waiting near where we were standing in front of First United Methodist Church. The flame transferred, then the second man took off. A bit further up the street, he transferred it to someone else.

After being out there for so long, it seemed so brief.

According to a schedule printed in the Daily News in ‘96, it was Robert Reardon whom I saw hand the flame off to Dale Mallory over by Ben Hill Street. Farther up, at North Greenwood, Betty Fagundes received the flame.

Interestingly enough, 10 years later — as an Auburn University journalism intern at this newspaper — I interviewed Mrs. Fagundes for a 10-year Olympics memorial story. I had no idea she was one of the people I actually saw — at least from a distance — carry the flame.

Like I said, at 12 years old I didn’t appreciate the full implication of what I saw. But 20 years later, I have to thank my mom for — many things, overall, but in this case — dragging me out of bed early on a July morning to stand on a packed sidewalk and see a part of history.

This graphic from the July 15, 1996, edition of LaGrange Daily News shows the route and runners of the Olympic flame on July 17.

http://lagrangenews.com/wp-content/uploads/sites/37/2016/08/web1_0807TorchRoute-1.jpgThis graphic from the July 15, 1996, edition of LaGrange Daily News shows the route and runners of the Olympic flame on July 17.