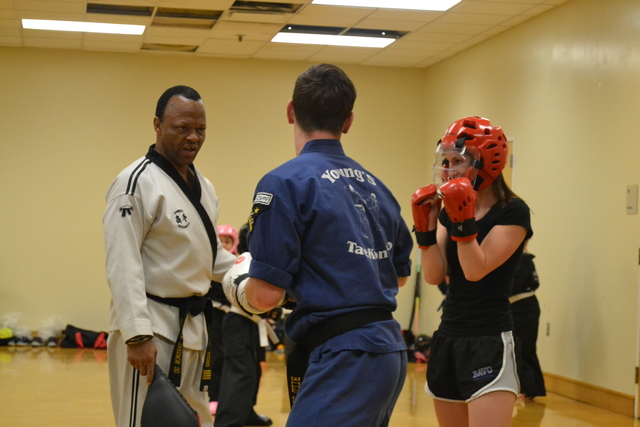 LaGRANGE — Parents and students are defending a popular taekwondo teacher after he was accused of child molestation on Wednesday.

Robert “Toby” Young, 59, of LaGrange was charged with four counts of child molestation, enticing a child for indecent purposes and solicitation of sodomy. He was denied bond Friday morning and will remain behind bars in the Troup County Jail.

Young, owner of Young’s Tae-Kwan-Do Academy, was arrested Wednesday night on accusations of having inappropriate physical contact with an underage girl inside his home earlier that day in the 700 block of Bridgewood Drive.

The girl, under the age of 16, said one of the inappropriate incidents happened just three hours before it was reported, according to LaGrange police investigators. Later that night, Young was taken into custody.

“In a case as serious as this, when there is clear evidence … and enough evidence to support probable cause, we’ll make an arrest,” explained Lt. Dale Strickland, commander of administrative services at the LaGrange Police Department. “… We want to arrest them before they can re-offend.”

The news of Young’s arrest spread like wildfire throughout the tight-knit martial arts community. Many parents of Young’s students were shocked by the announcement.

“My first thought was it wasn’t true,” said Kacey Maddox. “This is the man who has dedicated his life to helping students and adults of all ages, people with special needs … he is very active in the community and a true man of faith. Taekwando is his passion … he’s worked very hard to get where he is. This is not something he would do.”

Maddox’s daughter, Abby, 14, studied with Young for seven years at the Mike Daniel Recreation Center at 1220 Lafayette Parkway. She, and other parents who sit in on his class, said students not only learn the self-defense moves, but discipline, respect for themselves and others, and leadership skills. Children were also encouraged to reach out to their community and help others.

Abby became a black belt, instructed class beside Young and even traveled with him and other students out of town, her mother said.

“Never one time, at any time, has anything questionable been brought up,” Kacey Maddox said. “Not only with my child, but with any other child either. … I would never put my daughter in the care of someone who I didn’t feel could be trusted and would protect them. I feel I can (trust them) with Mr. Young.”

“He has always been particularly careful about students leaving his class for any reason without an adult accompanying them,” she wrote via email. “He has had discussions with me personally in regards to my son leaving after class to go to the gym unattended. His concern for the kids is unprecedented.”

Don Howell, who retired Wednesday as the director of Troup County Parks and Recreation, said in light of the allegations, the department has suspended all karate classes for the time being. Anyone who is currently enrolled will be refunded their registration fees.

Howell also stated he was not aware of any allegations made against Young while he was actively working at the recreation department’s facilities.

Darren Gravat and many other parents fear the accusations alone may have already ruined the martial arts teacher’s previously untarnished reputation.

“Our concern is people will just jump to conclusions,” Gravat explained. “He’s innocent until proven guilty. That’s hard for some people to believe. They just want to make assumptions. But he is innocent … people that don’t know him will convict him without knowing all the facts. But the parents have seen nothing but positive things out of this man. Parents get along with him, and he gets along with them.”

Parents like Joy Pemberton are struggling to understand the allegations against Young and how to explain it to their children. Her son Benjamin, 13, took taekwando lessons from the martial arts teacher for five years.

“We told him because the classes were going to be canceled,” she said. “We gave him limited details. … He was very shocked and upset. … Then because the subject was brought up, we asked him, ‘Has anything ever happened to you?’ And he said no.

“We wanted to go to the (bond) hearing and my son wanted to go in full uniform to support him,” Pemberton continued as her eyes welled up with tears. “That’s one of the things he (Young) taught him. To be honorable, and do what is right and stand up for others … and that’s exactly what my son wanted to do.”

Pemberton’s son was not the only student willing to stand up for the teacher.

“He’s like a father to me. I don’t know where I would be if he wasn’t my mentor or instructor,” said Abby Maddox. “He’s taught me discipline. … He’s never shown anyone disrespect. … I’ve had lots of opportunities to help others in the community, and I just can’t thank him enough for him giving me these opportunities.

“I know that he’s always stood for the good, and no matter what happens I will always stand beside him and with him,” she added.

Parents are now scrambling to find someone to teach class while Young is away — and a location, said Gravat. Some of the students have a tournament next week.

His supporters plan to hold down the fort and encourage their mentor until he returns.

“We’re doing what he has taught us to do, which is stand up for one another,” said Gravat. “If we can find a place to continue the class, we will. He would be very proud of is for continuing to stick together.”

“I know 100 percent he did not do this and we’re going to do whatever we can to clear his name,” Kacey Maddox stated. “The outpouring of support shows me how amazing of a person he is and it just speaks volumes to me of his character.”

Meanwhile, Young will remain in the Troup County Jail until he makes his first official court appearance.

According to his Facebook page, he also taught taekwando classes in Carrollton.

Here’s what others had to say:

• “My youngest is a girl, and Mr. Young has never shown anything but respect to her. She was absolutely devastated when I told her what has happened. She cried inconsolably for a long time.” — LaLani L. Moone, parent.

• “We stand behind and support Mr. Young 110 percent and will be here for him when the truth does come out.” — Jessica Gentry, parent.

• “Mr. Young is such a great mentor to everyone in and out of his class. The kids really look up to him and give him the utmost respect.” — Kinina Barrett, parent.

• “I respect that we have a legal system that gives victims a voice. I just hope the legal system is able to correctly determine who the victim is in this case.” — Connie Abel, parent of former student.

• “My kids attend Mr. Young’s class and we stand by him 100 percent. He’s an amazing person!” — Amber Phillips, parent.

In this Daily News file photo, Toby Young instructs students during a class at the Mike Daniel Recreation Center in March. Students of Young and their parents are supporting the martial arts instructors after he was charged Wednesday from an accusation of child molestation.

http://lagrangenews.com/wp-content/uploads/sites/37/2016/08/web1_DSC_0359-1.jpgIn this Daily News file photo, Toby Young instructs students during a class at the Mike Daniel Recreation Center in March. Students of Young and their parents are supporting the martial arts instructors after he was charged Wednesday from an accusation of child molestation.