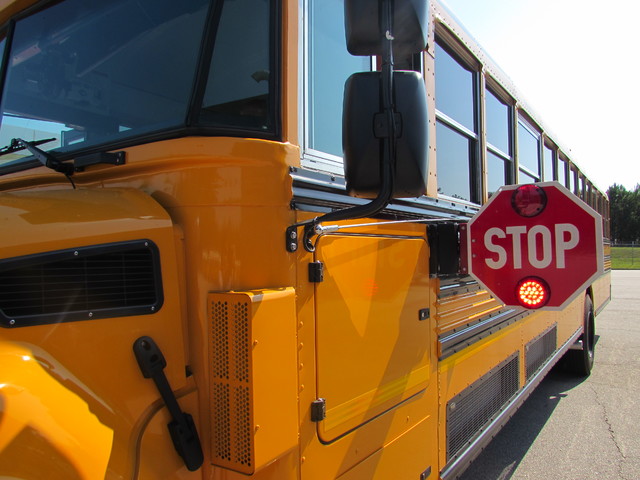 LaGRANGE — For one day, school bus drivers counted how many cars failed to yield as the buses picked up and dropped off children throughout Troup County.

During those few hours, 78 motorists ignored the red flashing signs on the side of the school buses and continued driving as children were waiting to either board the bus or cross the street to get home, said Jeff Turner, director of transportation at the Troup County School System.

“Students are at the most danger when they’re at the bus stops,” he said. “We have those ‘drive bys’ coming from motorists behind the buses and those driving towards them.”

School bus drivers managed to write down the car and tag information of at least 60 violators last year, Turner added. He then passed on the details to Sgt. 1st Class Maurice Raines, commander of Georgia State Patrol post 2 in LaGrange.

It is part of a unique partnership between the school transportation department and the GSP.

Raines and his troopers received the names of the car owners from a database and then tracked down those drivers.

“The drivers were careless or distracted or running late and were not prepared to meet a school bus,” Raines said. “We’ve made seven or eight cases against these drivers, and some people admitted to doing it.”

Troopers and local law enforcement agencies are prepared to do it all over again when the school buses start rolling this Wednesday in Troup County.

Drivers who encounter a bus that yields its sign on a two-lane or multi-lane road must stop, said Raines. The only exception is if there is a physical barrier between the lanes, such as concrete pillars or grass, he added. That rule applies to motorists who are driving toward or coming from behind the bus.

If drivers do not stop, there will be consequences, Raines and Turner both said.

“We are taking these violations very seriously,” Turner said. “We will be watching and filling out forms to give to GSP.”

Any driver caught failing to yield to a stopped school bus could face fines between $300 to $1,000, plus six points added to their driver’s license, Raines said.

“We want zero fatalities and zero children hurt,” he added.

“Our primary goal is to keep students safe,” Turner said. “But we will keep tabs, and we will report you.”

During the last two years, there have been no fatalities of children at any bus stops in Georgia, Turner added.

Troup County school bus drivers transport about 8,000 children each year. Some of their busiest intersections are along New Franklin, Hammett and Whitesville roads.

The TCSS transportation department is also looking at adding cameras to the school bus stop signs to catch more violators. If the proposal is approved, the cameras would be ready for the 2017-2018 school year, Turner said.

Jeff Turner, left, director of transportation with the Troup County School System, and Sgt. 1st Class Maurice Raines, commander of the Georgia State Patrol post 2 in LaGrange, shake hands as part of a partnership to catch motorists who don’t yield to school buses.

http://lagrangenews.com/wp-content/uploads/sites/37/2016/08/web1_bus1.jpgJeff Turner, left, director of transportation with the Troup County School System, and Sgt. 1st Class Maurice Raines, commander of the Georgia State Patrol post 2 in LaGrange, shake hands as part of a partnership to catch motorists who don’t yield to school buses.

Drivers who encounter a bus with its stop sign out on a two-lane or multi-lane road must stop.

http://lagrangenews.com/wp-content/uploads/sites/37/2016/08/web1_bus2.jpgDrivers who encounter a bus with its stop sign out on a two-lane or multi-lane road must stop.