‘They made me feel hopeful’ 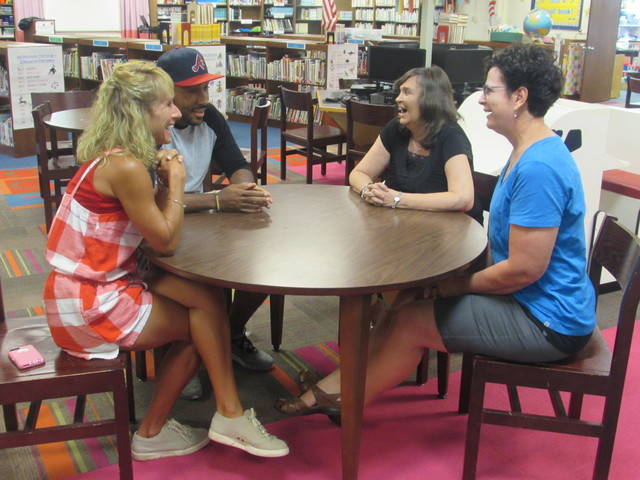 LaGRANGE — When four local teenagers recently decided to find jobs at the LaGrange Housing Authority instead of joining gangs, the students’ determination took many by surprise.

The story quickly spread through traditional and social media across the country.

But for four educators at Whitesville Road Elementary School who know twins Demond and Deion Woodard, 14, Dylik Smith, 13, and Jalen Parham, 13, news of their resolve did not come as a shock.

“They’ve always been good kids,” said Heidi Jones, an English teacher who taught all four boys in fourth and fifth grade. “They are the kids that everyone looked up to.”

“They have big hearts,” added Rhonda Luke, who taught the boys in the school’s computer lab. “It was just a matter of getting them to show it.”

Demond, Deion, Dylik and Jalen all seemed to shine the most when they were participating in the elementary school’s extracurricular programs, such as the after-school basketball team and Troup County Fastest Kid track team.

“They wanted to bring home medals. They wanted to make their teachers, principal and parents proud,” explained Christine Nobley, who taught the boys math in fifth grade, was their basketball coach and headed the Fastest Kids team.

“With the basketball team, it brought out their leadership qualities, especially in Dylik,” he said. “They wanted to pass the ball to other teammates so everyone got a chance to play. They directed (other players) on the court … and they had a lot of pride in what they did … head up, chest out. They wore their team T-shirts with pride every Wednesday.”

LaGrange College also gave Whitesville Road Elementary School tickets to sporting events, which allowed the four boys and other students to attend games when class was not in session.

All four teachers said they are close to Demond, Deion, Dylik and Jalen. They spent time with the boys at school functions outside of the classroom and understand the impact of their decision to stay away from the gang life. All four students live in areas of the city that are prone to gangs and violence, the educators said.

“The statistics are not in their favor,” said Jones.

“If you ridiculed those boys, they wouldn’t listen to you,” stated Thornton. “But if you embrace and love them, then they’ll respond to you. … They are respectful and they have manners.”

Jones and her fellow teachers said the school has been one step on the boys’ journey to better themselves. But more is needed.

“It’s not just three or four people, it is a community saying, ‘yes’ instead of ‘no,’” Jones explained. “The boys live in a neighborhood and chasm of ‘no.’ We planted seeds here (at school). It would be arrogant of us to think all this happened just because of us. It is also the recreation coaches, the housing authority … the fact that Mrs. (Zsa Zsa) Heard (housing authority director) took them seriously and got other people to take them seriously and give them jobs. They saw what the boys are capable of and now everyone else will too.”

Demond, Deion, Dylik and Jalen will start at their respective middle schools later this week. Their former teachers believe their stand against gangs can have a long-lasting, positive impact on their future educators and peers.

“I’d like to see them lead a youth program,” said Nobley. “To see the boys take younger kids under their wing … I can see this becoming a whole new program.”

All four educators said Demond, Deion, Dylik and Jalen’s powerful decision has inspired them — and they hope others are too.

“I’m just super proud of them,” Luke said. “They took a stand and made a good choice. I was like a proud mama when I saw the Facebook post on their decision to not join gangs.”

“I just want to tell them, ‘Thank you,’” said Jones. “They made me feel so hopeful that everything they were inundated with in their neighborhoods didn’t win. Love wins … and those boys are loved by us and their families. I am grateful for their courage. … Those boys embraced the fact that hope and life still exists.”

Demond Woodard, then 12, won the gold medal in the Troup County Fastest Kids race in 2014.

http://lagrangenews.com/wp-content/uploads/sites/37/2016/08/web1_web0808DemondWoodard.jpgDemond Woodard, then 12, won the gold medal in the Troup County Fastest Kids race in 2014.

Deion Smith, 14, left, pencils a cutting line onto a board as Dylik Smith, 13, Jalen Parham, 13, and Demond Woodard, 14, look on Aug. 1 at the LaGrange Housing Authority’s maintenance shop.

http://lagrangenews.com/wp-content/uploads/sites/37/2016/08/web1_Four-Boys.jpgDeion Smith, 14, left, pencils a cutting line onto a board as Dylik Smith, 13, Jalen Parham, 13, and Demond Woodard, 14, look on Aug. 1 at the LaGrange Housing Authority’s maintenance shop.

Jalen Parham, then 11, poses in his All Star basketball team T-shirt in 2014.

Dylik Smith, then 11, holds up a medal after participating in the Troup County Fastest Kids Race in 2014.

http://lagrangenews.com/wp-content/uploads/sites/37/2016/08/web1_web0808Smith.jpgDylik Smith, then 11, holds up a medal after participating in the Troup County Fastest Kids Race in 2014.