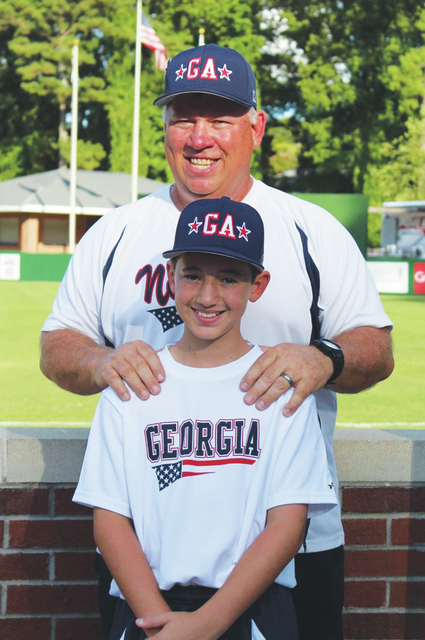 LAGRANGE – It’s been a big summer for the Thompson family.

There were eight teams in the Tournament of State Champions, and the Columbus team was the one celebrating when the final game was played.

Making the moment even more special for Skip Thompson, he was able to celebrate with his son Cole Thompson, who is a member of the team.

Skip Thompson’s younger brother, Scott Thompson, is hoping to be able to experience that feeling later this week.

Scott Thompson is the head coach for the Hogansville all-star team that is playing in the Dixie Youth Baseball 11-12-year-old World Series in Mississippi.

Hogansville, or team Georgia as it is now called, has won its first two tournament games, and it is three victories away from winning the World Series.

If that happens, the Thompson brothers can compare national-championship trophies the next time they get together.

“We can’t have him talking about his team the whole time,” Scott Thompson said with a laugh.

Scott Thompson said he and his brother used to get together occasionally to play golf, but they have put the clubs away to focus on baseball.

“Once our kids started playing ball, there’s no time for golf,” Scott Thompson said. “We put up the golf clubs, and got out the baseball bats, and we’ve been doing that ever since.”

Scott Thompson said Cole and Zack have a lot in common.

“My son is 12, and his son is 11, so they’re real close in age, and they both love baseball, and other sports, too,” Scott Thompson said.

Whether Scott Thompson and his team will get to celebrate a championship will be determined in the next few days.

So far, so good for team Georgia.

In its first two games in the World Series, Georgia beat Virginia 14-4 and Laurel, Miss. 12-2.

In Sunday’s win over Laurel, Zack Thompson got Georgia off to a fast start with a two-run home run in the bottom of the first inning.

Georgia has been a dominant team throughout the summer.

Hogansville went 9-1 in the district and state tournaments combined, and the great play has continued now that it is team Georgia.

Team Georgia has won nine consecutive games overall, and it has reached double digits in runs in eight straight games.

Georgia was off on Monday, and it will resume its title quest with a game at 8 p.m. today.

The tournament is scheduled to continue through Thursday, although Mother Nature could have other ideas.

“One thing we’ve got to do over the next three days is dodge the weather,” Thompson said. “They say it’s 90 percent chance tomorrow, 100 percent the next day, and 90 the following day.”

Thompson said Dixie Youth Baseball has shown over the years it is able to finish tournaments on time, though.

“The Dixie Youth baseball commissioner said in all his years being associated with Dixie Youth, they have always finished on the day that it is scheduled to finish,” Thompson said. “They have plenty of Diamond Dry. They have tarps for the infield. It may be where we have to play a doubleheader, but we will not play tripleheaders.”